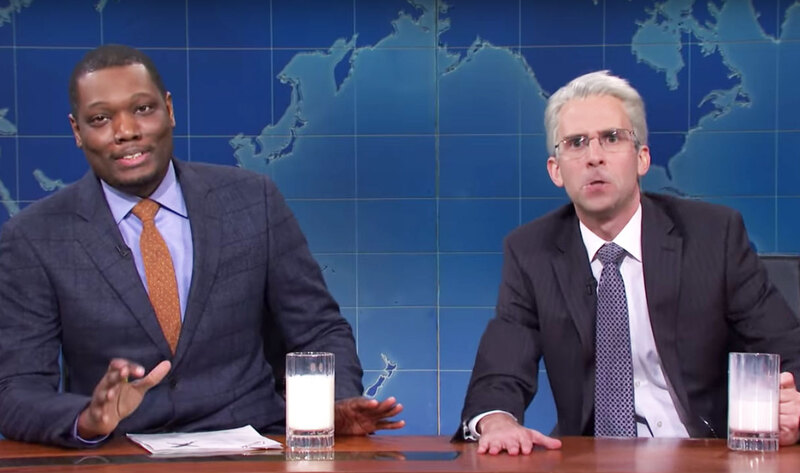 A recent episode of comedy show Saturday Night Live (SNL) explored the downfall of the dairy industry following the recent bankruptcy filing of dairy giant Dean Foods. The “Weekend Update” segment opened with host Michael Che, who interviewed (fictitious) Dean Foods president of milk distribution Scooter Rineholdt (played by Kyle Mooney). “There’s nothing wrong with drinking cow’s milk, okay?” Rineholdt told Che after offering him a glass of milk. “I don’t know where these rumors came from: ‘Dairy is bad for you’; ‘Cows don’t like it when you touch their boobies.’ It’s just not true, Che.” Rineholdt becomes agitated as he talks about his personal problems and consumers’ declining interest in milk—all while chugging his own tall glass of milk. Che asks if perhaps the dairy industry has explored some healthier alternatives. “We use skim, nonfat, little fat, and even one with no lactose,” Rineholdt said. “The dairy industry has always been there for you guys. Now, because of some nut job out there, everyone is trying these non-dairy milks. I’d rather drink my own piss.” But Che tells him there are many better alternatives to cow’s milk these days. Rineholdt counters the response with bizarre news stories such as a man who quit drinking dairy, goes to bed and never wakes up; a pregnant woman who drank oat milk and then her newborn child goes blind; and a soy milk-drinking toddler who joins ISIS. “Maybe you just need to accept that times are changing,” Che responds. Earlier this month, SNL’s “Weekend Update” segment explored the declining popularity of meat through recurring characters Wylene and Vaneta Starkie, owners of ficticious meat gift delivery service Smokery Farms that promise to only slaughter “stupid and talent-free” animals to help customers combat their cognative dissonance about loving animals while continuing to eat them.

Amazing Animal Organization Saves 25 Horses From Woman Who Was Starving Them!