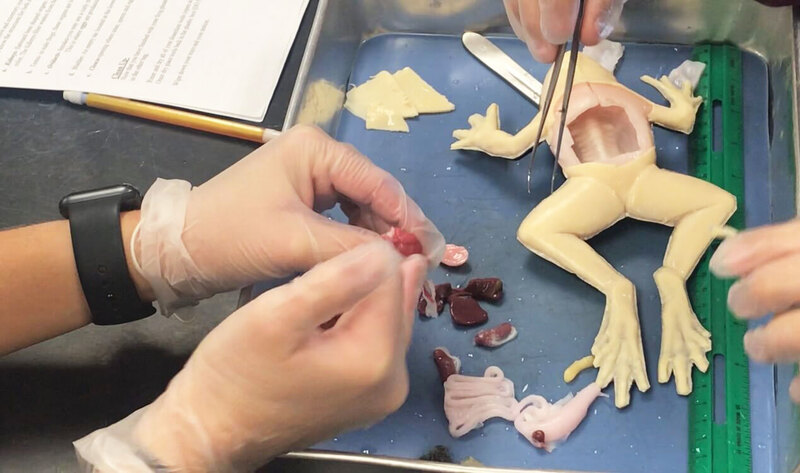 This week, nearly 100 students in J.W. Mitchell High School in Florida were the first to use dissection education tool SynFrog, a hyper-realistic replacement for living frogs with removable and anatomically correct internal organs. The educational tool was developed by synthetic modelmaker SynDaver in partnership with People for the Ethical Treatment of Animals (PETA). At least three million frogs are killed annually for school dissection lessons, a practice that often turns children away from careers in science, teaches them to be apathetic toward living beings, and depletes wild frog populations. In addition to being a more humane approach to dissection, the SynFrog is free from chemicals such as formaldehyde and formalin and allows students to interact with organs that are not rendered monochromatic due to chemical baths used to preserve dead frogs. “PETA has promoted virtual dissection for years, but some teachers still request ‘hands-on’ teaching tools—and that’s where the SynFrog comes in,” Shalin Gala, PETA Vice President of International Laboratory Methods, said. “It’s safer, more effective, and more humane than cutting up dead animals—a practice that’s now destined for the trash bin of archaic education methods.” Teachers interested in replacing dead frogs with SynFrog can contact PETA or SynDaver for assistance.