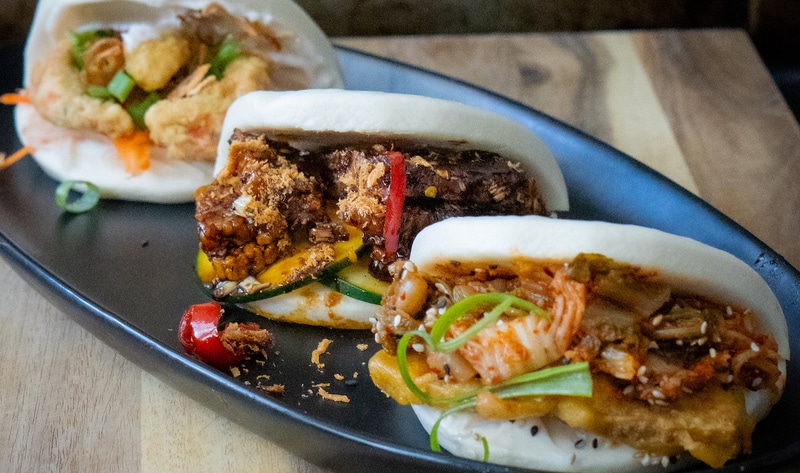 Denver’s vegan scene is booming, but not in the traditional way. Lists of the “most vegan-friendly cities” tend to favor brick-and-mortar restaurants, but it’s not uncommon in Denver to find vegan food trucks parked outside your favorite brewery, or see up-and-coming vendors dishing up innovative meals at one of the city’s many animal sanctuaries. You might have a tough time finding these eats on Google and Yelp, but an under-the-radar pop-up locale has recently emerged to give Mile High vegans a promising home base. If you want to sample the smorgasbord of vegan culinary talent, you have to check out PHYTO—Denver’s mother-and-son-run incubator for plant-based entrepreneurs with a passion for bao, booze, and epic burritos. Here are seven incredible dishes to put this backyard space on the map.

1. The Cincinnati Chili Burrito by Migration Taco
At PHYTO pop-ups, vendors are encouraged to adopt a theme, and one of the most unique to date was the Chile vs. Chili menu by the new-yet-beloved food truck Migration Taco. The special menu consisted of four dishes—tacos, nachos, burritos, and mac and cheese—and each were available with either a Tex-Mex chili or southwestern green chile spin. This epic handhold featured a veganized version of meaty Cincinnati Chili (spaghetti and all) wrapped in a hot flour tortilla. If noodles are acceptable in spring rolls, spaghetti is fair game in a burrito.

2. Dragon Elote by Cholo Ass Vegan
Apart from the coasts, it’s rare to find vegan-friendly Mexican street corn, but not when Cholo Ass Vegan pops up at PHYTO. Grab a napkin before diving in—this elote is smothered in vegan mayo and pulverized Vegan Rob’s Dragon Puffs. It’s the perfect side dish for the other popular dishes such as the street tacos or steamy pozole. Order a creamy iced horchata to balance out those fiery foods.

3. CBD-infused boba Thai tea by Chef Arunee of Rocky Mountain Vegan
You can find Chef Arunee at nearly every PHYTO pop-up—think of her as the unofficial resident beverage director. The menu changes according to the theme, but her specialty is her Thai tea. For any vegan who has been craving this milky orange tea (with or without the tapioca pearls), Arunee has your fix. Her Thai teas are pleasantly not too sweet with a punch of earthy black tea flavor. As if the Thai tea weren’t perfect already, she’ll sometimes infuse the drink with CBD (it’s Colorado, after all).

4. Apple Pie Pizza À La Mode by Piante Pizzeria and Brightside Ice Cream
Hot out of Piante Pizzeria’s mobile oven, this dessert-style pizza features a wood-fired crust topped with gooey apple slices and a generous scoop of Brightside vanilla ice cream. This apple pie à la mode meets pizza mashup is the result of PHYTO’s community-building principals. Each event typically hosts a minimum of two vendors—one to dish up the main meal and another to serve sweets—and the two are encouraged to work together on one unique dish. Such was the case when this dessert pizza dazzled vegan pirates and witches at the Halloween bash in PHYTO’s backyard.

5. The Bao Bun Trio by Hella Herbivore
After one bite, bao might become your favorite kind of sandwich. While the Hella Herbivore menu includes a medley of Asian-inspired dishes such as Malaysian Laksa, Korean Fried Tofu, and Drunken Noodles, the real showstopper is the Bao Bun Trio. The three pillowy buns are filled with crispy garlic “shrimp,” sweet and chewy Indonesian tempeh, and spicy tofu kimchi. Come early—these buns go faster than vegan chicken at KFC.

6. Churro waffles with ice cream by Cholo Ass Vegan and Brightside Ice Cream
Top anything with a scoop of vegan ice cream, and you can almost guarantee it’ll be a crowd-pleaser. This deep-fried, cinnamon-dusted churro waffle buried by vanilla ice cream and dulce de leche is no exception. The breakfast-turned-dessert dish made its appearance at the “Casa Cruda” pop-up brunch (a.k.a. “hangover house”), where you could tame your Sunday morning cruda with saucy breakfast burritos and Bloody Marys.

7. Pan dulce by Tasha’s Kitchen
After eating your fill of this vendor’s seitan asada and jackfruit carnitas tacos, take home a box of traditional pan dulce (sweet bread). The brightly-colored conchas sell out fast, because who wouldn’t be enticed by fluffy, sugar-coated white bread? Don’t skip the other sweet offerings such as the pig-shaped, maple-flavored puerquitos; tender coconut and jam-filled besos; and chocolate chip-studded galletas.

Lauren Smith is the founder of The Oatmeal Artist, a health writer for HealthiNation, and a devoted cat mom living in Denver, CO.