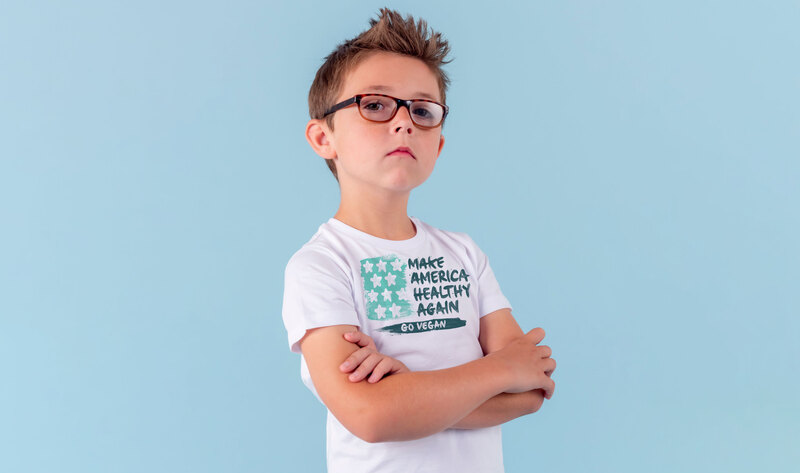 Nine-year-old activist Vegan Evan is challenging President Trump to help “Make America Healthy Again” by going vegan for one month and encouraging Americans to do the same. In return, Evan and vegan nonprofit organization Million Dollar Vegan will donate $1 million to war veterans. Evan—who is president of vegan group Animal Hero Kids and ambassador to Million Dollar Vegan—is leading the campaign which will donate the $1 million already in escrow within one hour of the president’s agreement on Twitter. “I’ve always wanted to ask the president to go vegan, so when this opportunity came up, I wanted to take the lead. Many people look up to the president and may give vegan a try if he does,” Evan told VegNews. “All my life I have been told that the United States of America is one of the greatest countries in the world. I love my country and I want it to be the best … I want to see America lead the way to make us a healthy world where everyone can be healthy and live the life they deserve.” The campaign is being backed by some of the nation’s leading medical doctors, including Dean Ornish, MD, Caldwell B. Esselstyn, Jr., MD, Michael Klaper, MD, Angie Sadeghi, MD, T. Colin Campbell, MD, Joel Kahn, MD, and Neal Barnard, MD. In a full-page letter written to President Trump and published in The New York Times, Evan writes: “Cardiovascular disease and stroke already create more than $329 billion in healthcare costs and lost productivity, while the American Diabetes Association has estimated the total cost to the economy of diagnosed diabetes exceeded $327 billion in 2017 alone. No wonder so many top healthcare professionals support our campaign!”

Earlier this year, 12-year-old Genesis Butler and Million Dollar Vegan offered $1 million to Pope Francis if he would go vegan for Lent. That campaign resulted in more than 1,000 stories from media around the world, a meeting with senior priest Paweł Ptasznik at the Vatican, and the pope’s blessing, however, it was not confirmed if Pope Francis went vegan. Now, that money is being offered to President Trump with the aim of inspiring people across America to rethink their food choices and improve their health. “If our nation went vegan and used our ‘great power’ for good, it would do three things: We would show the world that the US can once again lead by example by tackling climate change head on and not hiding from it; we would reduce nationwide healthcare costs and preventable deaths by curing health problems such as heart disease, obesity, and diabetes; and we would demonstrate that the US is a compassionate nation by taking care of all creatures, even the most vulnerable of animals,” vegan war veteran Bill Muir, who supports the campaign, told VegNews. “The choice is ours and the time to act is now.”

Lenny Kravitz Reveals He Is Vegan