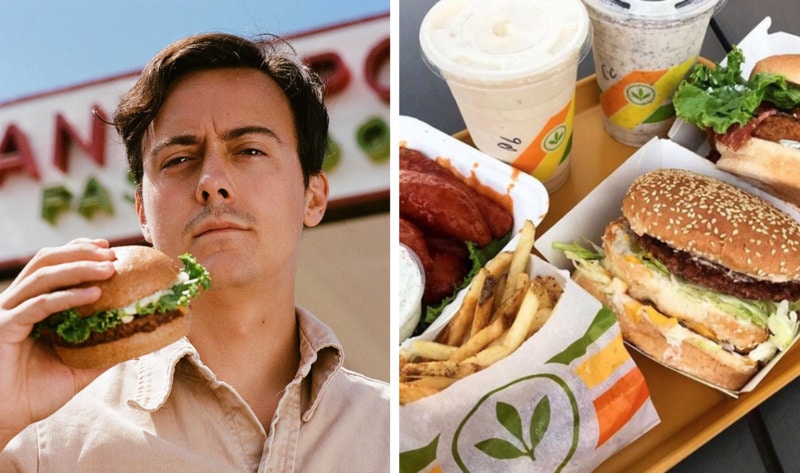 This week, media outlet Forbes released its annual “30 Under 30” list of influential leaders and several vegans made the cut in 2020, including Zach Vouga—co-founder and co-CEO of Southern California vegan chain Plant Power Fast Food (PPFF). Forbes chose its “class of 2020” from more than 20,000 nominations, recognizing Vouga (29) in the Food & Drink category for his bold mission to “create the vegan McDonald’s.” California-based PPFF serves vegan versions of familiar American fast-food dishes, including chicken nuggets, oat milk-based milkshakes, and classic burgers such as The Big Zac—a plant-based take on McDonald’s Big Mac named after Vouga. “In many ways, the vegan movement has reached a critical mass and it’s only a matter of time before we take over. Our ‘tipping point’ is now,” Vouga told VegNews. “The beef industry is on its heels, the dairy industry is shaking, and the fast-food industry is literally scrambling to maintain relevancy. It’s a thing of beauty to live through and help actualize, and the nod from Forbes both signifies and fortifies the tidal change.”

In 2016, Vouga and his co-founders opened the flagship location of PPFF in Ocean Beach, CA before expanding to a second location in 2017 in Encinitas, where it transformed a former Burger King into a vegan drive-thru. Since then, in addition to launching a food truck, the now five-location chain has set its sights on aggressive expansion to four more Southern California locations in the next 16 months, including its newest outpost set to open inside the space formerly occupied by Carl’s Jr. in Fountain Valley, CA in early 2020. It is no accident that PPFF takes over spaces left behind by fast-food giants but a strategy Vouga intends to pursue for years to come. “We are remaining laser-focused on the larger vision of usurping the Burger Kings and McDonald’s of the world,” Vouga said. “We are here for the long haul.”

Forbes’ also named musician and longtime vegan Billie Eilish to the music category of its “30 Under 30” list, who Vouga openly invites to dine at his growing chain. “Billie, if you’re reading this, let’s talk about getting you your own burger on the menu.”