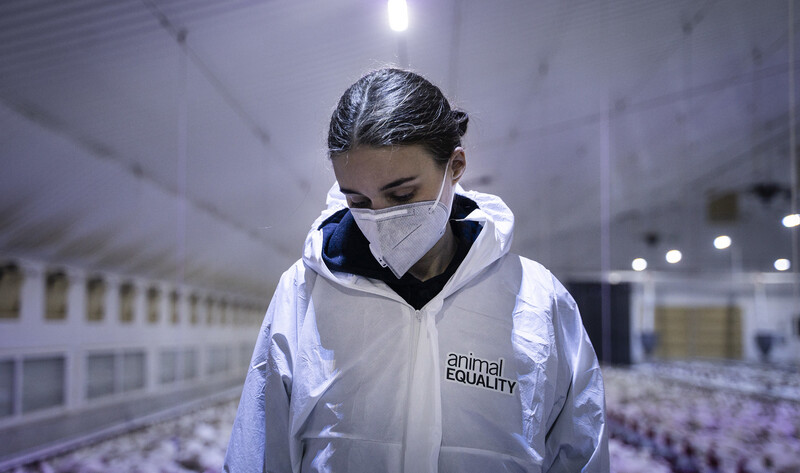 Vegan actress Rooney Mara recently went undercover to expose abhorrent animal cruelty at two factory farms. The actress partnered with animal-rights group Animal Equality to gather the footage, which they made into an eight-minute documentary With My Own Eyes. On the chicken farm, Mara found thousands of birds—deformed due to being bred so abnormally large that their legs and organs cannot support their bodies—crammed together in filthy conditions, languishing from illness and injury. On the pig farm, Mara found mother pigs confined in gestation crates, unable to turn around to properly nurse their young piglets crushed under their mothers’ weight, many dying from untreated hernias and inadequate veterinary care. “Nothing prepares you for looking into the eyes of a mother pig whose life is to be impregnated and left in a cage until she’s slaughtered,” Mara said. “I kept thinking about my sister who just had a baby, and how beautiful that instant desire to nurture and protect your child is. I can’t imagine how awful it must be to be literally trapped and crushing your own babies and not be able to do anything about it.” The farms that Mara documented collectively confine more than 3,000 pigs and more than 50,000 chickens—and, according to the chicken farm’s records, an average of 42 birds die per day due to distress. “Animal Equality’s undercover investigators face great personal risk to expose what the meat industry doesn’t want you to see, and what the public has every right to know,” Animal Equality President Sharon Núñez said. “We are deeply grateful to Rooney for bravely looking into the eyes of these animals, and joining us in our promise to them to share their cries with anyone who will listen. Her courage is truly inspiring.” Both Mara and her partner and fellow vegan Joaquin Phoenix often use their celebrity status to attract attention to animal-rights issues. In June, the couple led a march in West Hollywood, CA to commemorate the 9th National Animal Rights Day, both holding bodies of dead animals that perished inside factory farms.