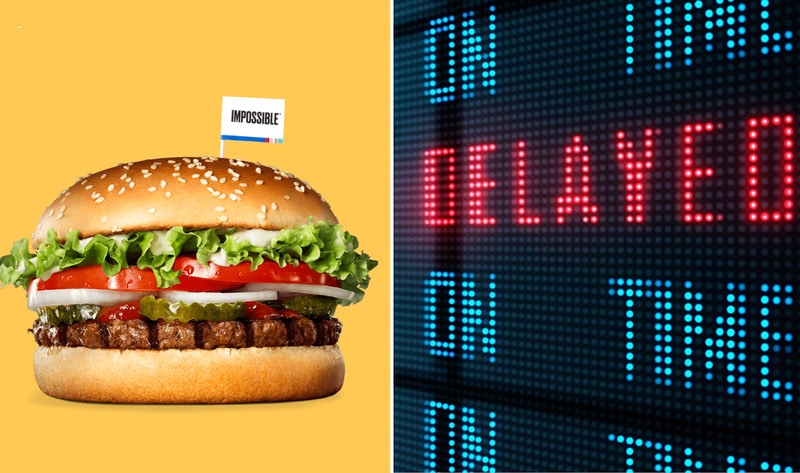 Starting today through December 30, global fast-food chain Burger King is giving out free Impossible Whoppers to travelers with delayed domestic flights at any airport in the United States. The chain’s “Delay Your Way” promotion aims to help make holiday travel a little bit better while promoting the vegan-friendly version of its iconic Whopper. The Impossible Whopper features a plant-based Impossible Foods patty topped with sliced tomatoes, lettuce, dairy-based mayonnaise, ketchup, pickles, and sliced onions on a toasted sesame-seed bun—which can be made vegan if ordered without the mayonnaise. In order to get a free burger, travelers must enter their delayed flight information on the “Delay Your Way” screen in the BK app before departure. Once the flight information is entered, app users will automatically receive a coupon for a free Impossible Whopper that can be redeemed at any participating Burger King in the US before January 6. Earlier this year, the chain tested the Impossible Whopper at 59 locations in and around St. Louis, MO, and soon after expanded the menu item to its more than 7,000 locations nationwide. Because of its continued success, Burger King is now testing three more meatless burgers—the Impossible Whopper, Jr., Impossible Cheeseburger, and Impossible Burger—at 180 locations in Milwaukee, WI, Cedar Rapids, IA, Augusta, GA, Cincinnati, OH, and Buffalo, NY.

Vegan Chicken Launches at Nearly all 2,600 Locations of China’s Version of KFC