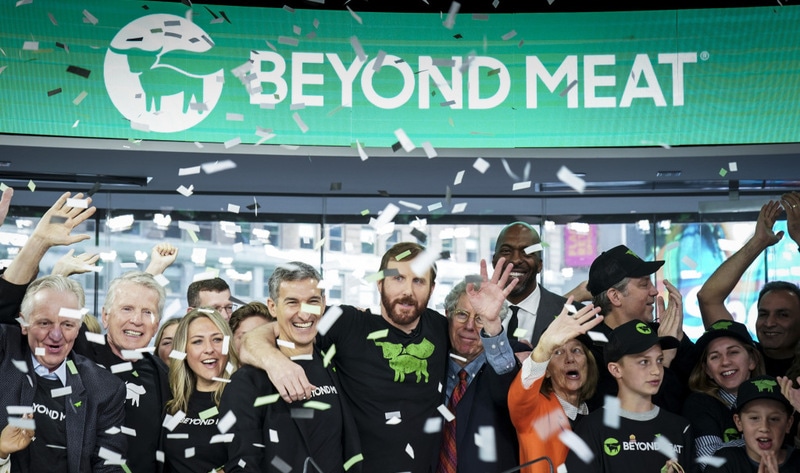 Vegan brand Beyond Meat may have the best performing stock of the coming decade, according to predictions made by CNBC. The outlet looked at emerging stocks in various sectors to determine which companies are best suited to serve the modern consumer in the next decade. CNBC noted that Netflix—the best performing stock of this decade—has effectively disrupted the media industry with its streaming services which has resulted in a more than 4,200-percent stock value gain since 2010. The outlet identified seven candidates that it believes will have a similar performance in the 2020s, including rideshare company Lyft, space travel brand Virgin Galactic, and vegan company Beyond Meat. CNBC backed up its predictions with recent statements made by influential financial institutions. “Plant-based US meat retail sales are approximately 1.5 percent of the total $80 billion meat category, which is well below plant-based milk’s 13-percent share,” investment banking company Piper Jaffray said. “A more mature plant-based market conservatively in the 7 percent to 8 percent range of all meat retail sales would translate to $6 to $8 billion by 2025.” When it comes to Beyond Meat specifically, investment banking company UBS believes that its foodservice sector is bound for massive growth in the coming decade, estimating that the vegan company to “reach $1 billion in food service sales long-term.” In May, Beyond Meat became the first vegan meat company to go public and saw surges in stock prices up to 163 percent on its first day of trading. In the category of companies who have raised $200 million from going public, Beyond Meat’s IPO is the best performing since before the 2008 financial crisis.