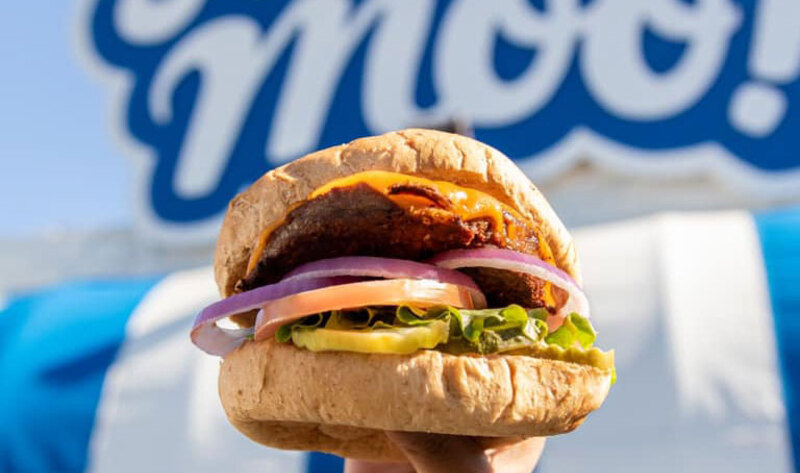 Vegan ice cream brand NadaMoo! recently expanded the vegan menu offerings at its Austin, TX-based scoop shop with the addition of plant-based PLOW burgers and French fries. PLOW Burger has permanently parked its third food truck in the city at the NadaMoo! shop. NadaMoo! opened its scoop shop in 2018 to sell the brand’s popular organic coconut milk-based flavors, along with options developed exclusively for sale in-store, which customers can order in a cup, cone, or as the base of a Nada-Mooshake. The shop also sells a selection of coffee beverages, vegan pastries, and non-dairy creamers. “This local Austin retail collaboration between NadaMoo! and PLOW (Plants Lead Our Way) Burger was seeded within the local Conscious Capitalism community,” NadaMoo! CEO and President Daniel Nicholson said. “I was fortunate enough to meet a like-minded individual in [founder] Jason Sabala and was later introduced to his partner on PLOW, another conscious human, Isaac Mogannam. We are so fortunate to live in a city like Austin where people see the value in the growth and prosperity of the plant-based movement. The PLOW team is all in on the movement, and they are working on a lot of amazing projects that we are excited about for the community and for our own selfish, conscious cravings.” NadaMoo! also recently launched its winter flavors at its scoop shop which include Gingerbread, Egg Nog, Mexican Hot Chocolate, and its popular Peppermint Bark—which is also now available at Whole Foods Markets nationwide.