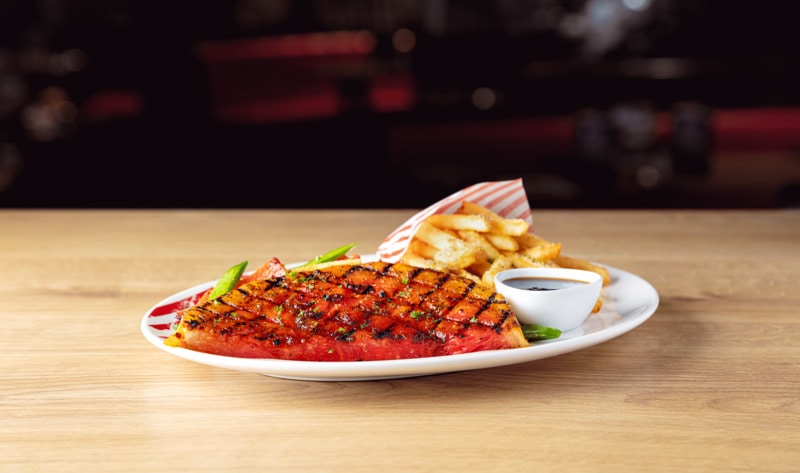 Starting January 6, international chain TGI Fridays will add a new vegan entrée featuring a watermelon steak to its menus across the United Kingdom. The “steak” is made by chargrilling watermelon slices before marinating them in savory spices and seasoning them with sriracha. The steak (£12.99 or $17.00) is served with a cooling avocado sauce and Fridays Legendary glaze (both vegan) and two vegan sides: fries and roasted vegetables. “We came up with the vegan steak to give our guests the same great taste from our grills but in a different way. Seasoning with Sriracha and garlic gives the dish savory, sweet, and spicy notes with a juicy center that cuts and eats like a juicy sirloin steak,” Terry McDowell TGI Fridays Head Development Chef said. “We’re really excited about the new vegan steak because it’s unique to us here at TGI Fridays. We have taken a watermelon and made it into a main course. Most people think of watermelon as a sweet dish, but we have flipped that on its head. It is full of flavor and perfect for Veganuary and those who want to try something different.” In 2018, New York City restaurant Duck’s Eatery gained international notoriety for its watermelon ham—an entire watermelon that it smoked and spiced to resemble its meat-based counterpart. TGI Friday’s watermelon entrée joins other vegan options on the chain’s menu, including its Fridays Vegan Burger—made with a mushroom- and coconut oil-based patty—which the chain debuted last January.

Ducklings Saved After Being Intentionally Run Over by Car