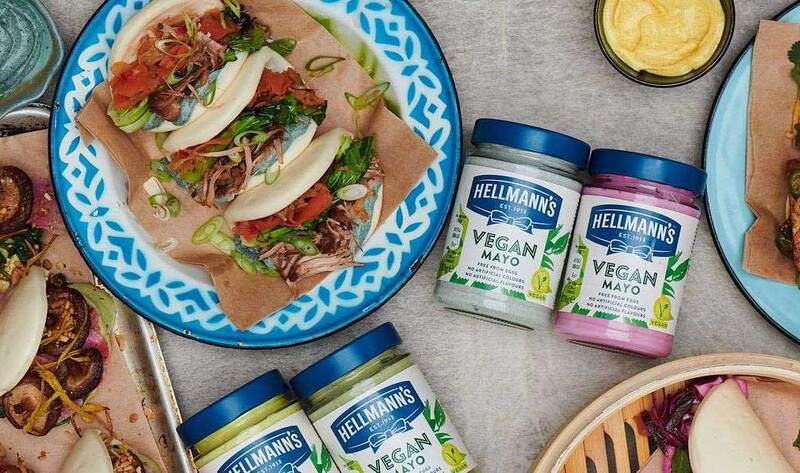 Condiment brand Hellmann’s created rainbow-hued, “millennial-inspired” vegan mayo flavors in honor of vegan campaign Veganuary. Each flavor gets its hue from plant sources, including spirulina (blue), beets (pink), turmeric (yellow), and basil (green). The new mayo products will, for now, only be available at the Vegan Rain-Bao pop-up truck on January 17 and January 18 in the Box Park in the Shoreditch neighborhood of London, England where Hellmann’s will be serving up a variety of vegan bao (Chinese buns) for £1.00 ($1.31) while keeping an eye on which mayonnaise flavor is most popular. The menu will highlight each flavor in four options:

“We’re excited to give Hellmann’s Vegan Mayo a rainbow-hued makeover in honor of Veganuary. The bao buns taste as good as they look, and we can’t wait for people to get their hands on them,” Hellmann’s Brand Manager Rhiannon Lines said. “We’ll also track sales in order to identify Londoner’s favorite flavor bao and our ‘star jar,’ in the hopes to bring back the special-edition (mayo jar) in the not too distant future.”

After a long legal battle over the usage of the word “mayo” with California company JUST (maker of JUST Mayo) that started in 2014, Unilever-owned Hellmann’s developed its own vegan mayonnaise and called it: Carefully Crafted Dressing and Sandwich Spread. In 2016, the vegan-certified spread (which Unilever sells under its “Best Foods” brand in some regions) launched in the United States and Canada before debuting in the United Kingdom in 2018 with new “Vegan Mayo” branding.