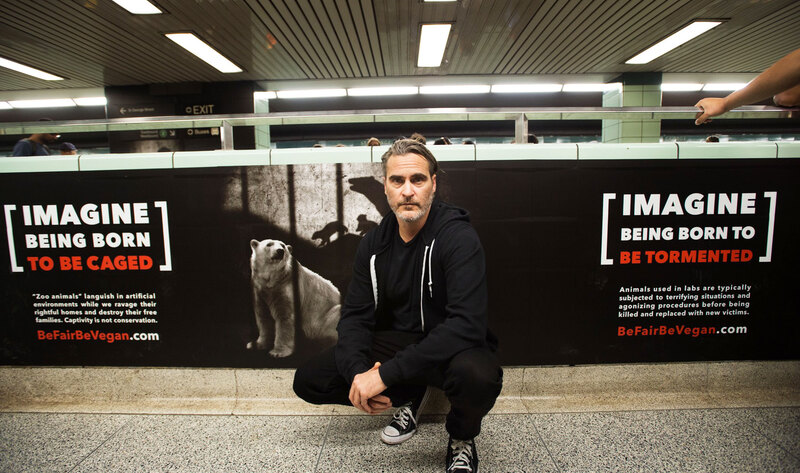 Today, vegan actor Joaquin Phoenix—known most recently for his award-winning role as Arthur Fleck in Joker—was taken into custody by Washington, DC police during the last installment of climate protest Fire Drill Fridays. Phoenix was arrested shortly after he gave a moving speech about the connection between animal agriculture and climate change at the protest—which was founded by actress Jane Fonda and inspired by vegan climate activist Greta Thunberg.

Joaquin Phoenix: “I struggle so much with what I can do [to combat climate change] at times. There are things that I can’t avoid – I flew a plane out here today, or last night rather. But one thing that I can do is change my eating habits.” pic.twitter.com/RaZILYq0La

“Something that isn’t often talked about in the environmental movement or in the conversation about climate change is that the meat and dairy industry is the third leading cause of climate change,” Phoenix said. “I think sometimes we wonder what we can do in this fight against climate change. And there is something that you can do today, right now, and tomorrow, by making a choice about what you consume. And I think that is something that is doable.” The actor admitted that he is not perfect and flew to attend the protest on an airplane. “But one thing I can do is change my eating habits,” Phoenix said. “So I just want to urge all of you to join me in that.” Phoenix gave a similar speech in front of his peers while accepting his award for best dramatic actor for his role in Joker during the 77th annual Golden Globes, which served an all vegan meal at this year’s ceremony. While no further details about Phoenix’s arrest are available at this time, Fonda was previously arrested several times at her protest and immediately released.