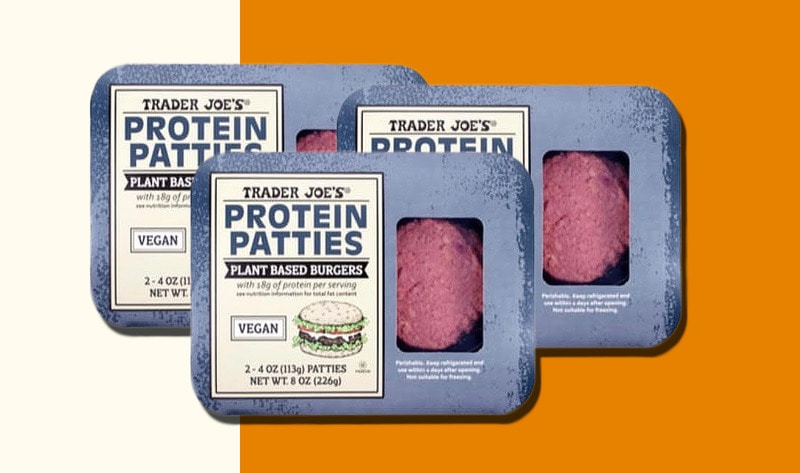 On January 20, grocery chain Trader Joe’s will begin stocking its new Protein Patties, private-labeled plant-based burger patties, in its deli section nationwide. The new patties are made from a blend of pea protein, sunflower oil, and beets, and will be available for $4.49 for an 8-ounce package of two patties. An internal memo obtained by VegNews reveals the patties will have a 10-day shelf life and, along with various burger preparations, can be spiced with Trader Joe’s Taco Seasoning Mix and used as crumbles for tacos. “It may seem far outside the ordinary, implausible, even, but plant-based burgers have become one of the most popular food trends of the past few years, and there’s no sign of slowing down,” Trader Joe’s said in a statement. “Folks are increasingly going for meatless burgers for all kinds of reasons, but we like to think that one reason in particular is primarily responsible: plant-based burgers have gotten really, really good recently. That’s why we decided to bring in our very own Trader Joe’s Protein Patties, a pair of pea protein-based, quarter-pound burger Patties, that offer the flavor and texture of a traditional beef hamburger, but with none of the meat—or any other animal-based ingredients for that matter.” Trader Joe’s patties contain 18 grams of protein each and, thanks to the addition of beets, can be cooked to medium rare like a traditional meat-based burger. “Unlike a traditional burger, though, Trader Joe’s Protein patties are totally vegan,” Trader Joe’s said. “Implausible as they may seem, Trader Joe’s Protein patties are here, and our veggie burger game will never be the same.”

Mexico is the Latest Country to Pave Roads With Plastic