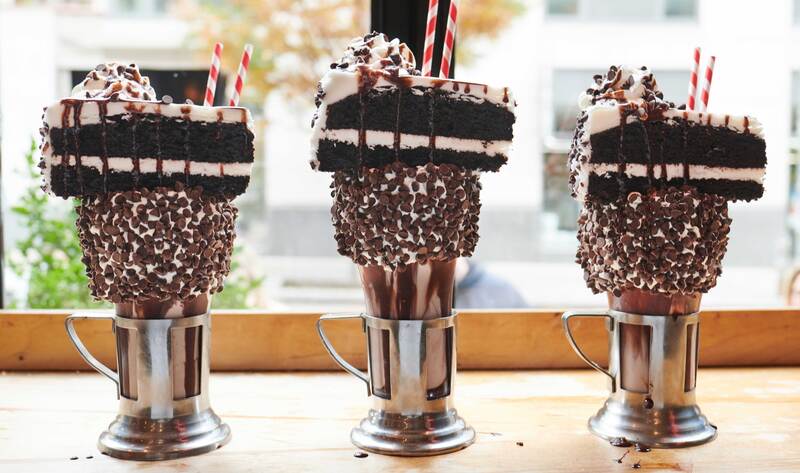 Starting today, restaurant chain Black Tap will add its first vegan “cakeshake” to the menu at all of its locations in New York City, Las Vegas, Anaheim, CA (in Downtown Disney), and internationally in Dubai, Geneva, Singapore, Abu Dhabi, Kuwait, and Bahrain. The team at Black Tap spent five years developing the Vegan Black ’N White CakeShake, an an over-the-top dessert comprised of a soy-based chocolate shake with housemade vanilla frosting and mini chocolate chips on the rim, that comes topped with a slice of black-and-white cake, rice-based whipped cream, and chocolate drizzle. “Our original CakeShake is one of our best sellers, so we took that idea and ran with it to create a new shake with a classic New York taste and all-vegan ingredients,” Black Tap Creative Director Courtney Wright said. “We held over 12 tastings with our global team, trying different shake bases like almond and coconut before landing on a soy base, tested eight different cake recipes, and multiple whipped cream formulas. We wanted to perfect every little component to ensure all the flavors would complement each other, while still offering that rich, indulgent flavor everyone wants in a milkshake. We’re really happy with the result, and are so excited for everyone to try it.” In addition to the CakeShake—which is Black Tap’s homage to NYC’s iconic black-and-white cookie—the restaurant chain plans to roll out a larger vegan menu that includes a portobello mushroom-based Nashville Hot sandwich and an Impossible All-American burger to all of its locations.