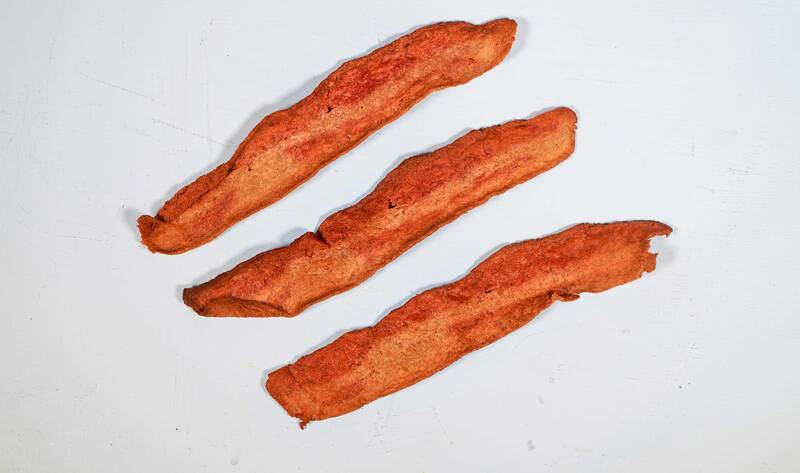 Bay Area-based startup Prime Roots (formerly known as Terramino Foods) will debut vegan bacon for one day only on February 14 (Valentine’s Day). The new bacon—which is Prime Roots’ first product—is made with a base of umami-rich kōji (a fungi used widely in Japanese cooking) that is fermented and mixed with plant-based fats to create a vegan “pork belly” block which is placed in a wood smoker before being sliced. Prime Roots founders Kimberlie Le (daughter of renowned Vietnamese chef Chi Le) and Joshua Nixon began working with kōji while attending the “Plant-Based Seafood Collider” course at the University of California, Berkeley and perfected a kōji-based vegan salmon burger during IndieBio’s four-month incubator program. In 2018, the company raised $4.25 million in a seed-funding round that it is using to innovate new alternatives to meat and seafood, including vegan versions of tuna, shrimp, lobster, beef, and more at its new 12,000-square-foot facility. Prime Roots conducted a poll to determine which product consumers wanted most and decided to launch with vegan bacon as it was the resounding winner. “We felt like there were no real meat-free alternatives to bacon on the market, other than tempeh and seitan, both of which lack the smokey taste and crispy yet chewy texture of real bacon,” Le told VegNews. “Unlike our competitors, we avoid the use of hyper processing techniques and we take on a very different approach to creating our protein products. At Prime Roots, we go to the roots by using kōji, which is something that we commonly eat and has been eaten for thousands of years, and turn it into protein products like bacon, which is beloved by many.” The company will begin taking orders for vegan bacon (which can be sent as a “bacongram” gift) on its website starting at 9am on February 14 until supplies run out and ship 8-ounce containers on a rolling basis. Additional vegan products will become available as Prime Roots continues to scale.

Push U.S. Senate to Prevent Humanitarian Disaster in Yemen and Demand Logging Ban in Koala Habitats: 10 Petitions to Sign this Week to Help People, Animals and the Planet!

Digestive Enzymes 101: What, Why, and Where to Get them from Plant-Based Foods