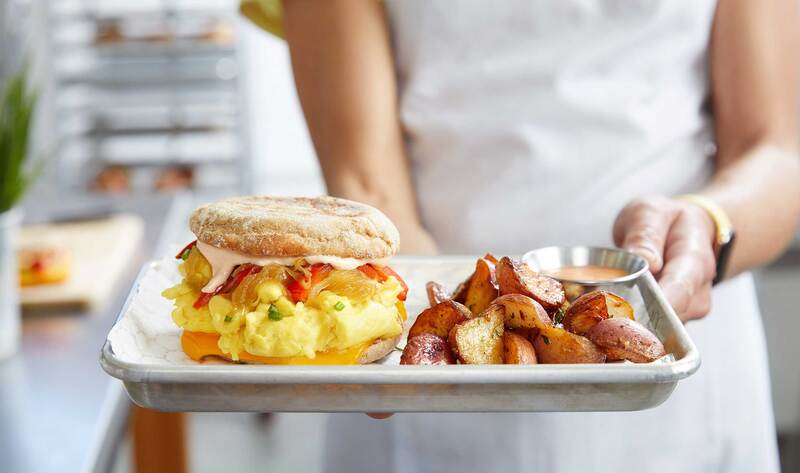 This week, plant-based startup JUST announced its partnership with foodservice company Sodexo, which will launch its mung bean-based JUST Egg on menus at school, hospital, and corporate cafeterias across North America. “We’re thrilled to become a preferred supplier to Sodexo, which serves over 75 million consumers each day,” JUST CEO Josh Tetrick said. “Sodexo’s sustainable menu innovation initiative has resulted in hundreds of new plant-based recipes and we’re excited to see a range of delicious JUST Egg dishes arrive at clients’ facilities in the months ahead.” The partnership is part of Sodexo’s “Better Tomorrow 2025” plan which aims to reduce the foodservice provider’s carbon emissions by 34 percent by 2025.

In August, Sodexo added dishes made with Impossible Foods plant-based meat to the menu of more than 1,500 cafeterias, expanding its “Love of Food” initiative that brought 200 vegan dishes—developed with the help of the Humane Society of the United States—to the foodservice company’s cafeterias in 2018. “Consumers are looking for plant-based items that mimic the foods that they are either not eating any longer or trying to eat less of—for whatever reason, be it wellness, animal welfare, or environmental sustainability,” Rob Morasco, senior director of culinary development at Sodexo, said. “JUST Egg products are nearly indistinguishable from their ‘real’ counterparts—they taste like eggs, cook like eggs, and can bake like eggs. We’ve done a considerable amount of recipe development for our North America customers and will be working with JUST Egg on the next wave of Sustainable Diets innovation for sure.”

In 2018, JUST Egg debuted at retailers nationwide and has sold the vegan equivalent of 20 million chicken eggs to date. This April, JUST will debut a new format of the JUST Egg, a folded omelette sold in the frozen section at select retailers nationwide with a greater expansion planned shortly thereafter. In December, the company acquired a 30,000-square-foot production facility and 40 acres of land in Appleton, MN where it will work to scale and improve JUST Egg with the aim of reducing its cost by 35 percent by May.

Wuhan Lab has Been Studying Coronaviruses Since 2008!