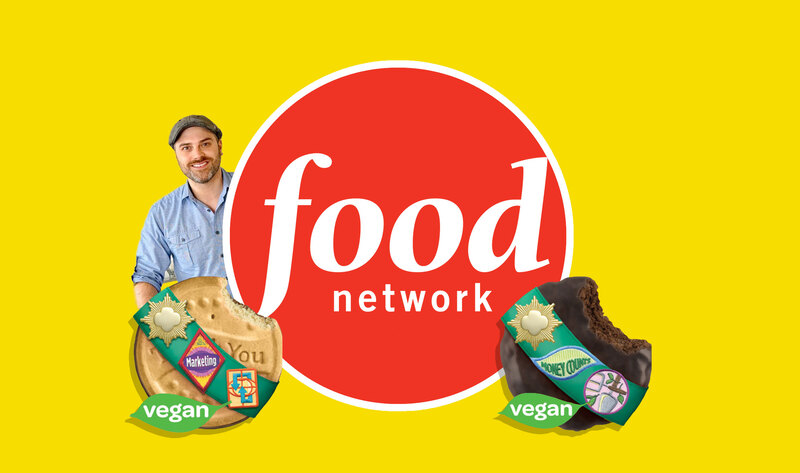 On February 17, vegan chef Dustin Harder will compete on an episode of Food Network’s Girl Scout Cookie Championship, where five chefs are challenged to create desserts using iconic Girl Scout cookies. The three chefs with the most votes will then advance to the next round where they will have to bake a cake for a chance to win a $10,000 outdoor adventure and a year’s supply of Girl Scout cookies. “As a vegan chef, the opportunity to appear on Food Network goes beyond the scope of it being a competition show,” Harder told VegNews. “It’s so much more, it’s an opportunity to bust the myth that veganism is weird or gross on one of the biggest food platforms there is. It’s an opportunity to showcase vegan cuisine, proving to the masses it can be just as good if not better than what the mainstream public is accustomed to.”

In 2014, Harder, a graduate of Natural Gourmet Institute in New York City, launched web-based vegan cooking series The Vegan Roadie (now available on streaming service Roku) with the mission of uncovering the best vegan food in the country and teaching viewers how to create simple meals in their hotel rooms. In 2018, Harder took the series on the road to Italy for its third and final season. In the fall of 2020, “The Vegan Roadie” will resurrect as a podcast with new episodes and Harder—who previously authored two vegan cookbooks, Epic Vegan and The Simply Vegan Cookbook—will release his newest cookbook, Epic Vegan: Quick and Easy, in early 2021. “When I started The Vegan Roadie, I did it because I felt there was a void that needed to be filled.” Harder said. “While I believe the void in the mainstream media still exists, it’s very clear the lean in the direction of vegan is starting to happen. Guy Fieri now covers vegan eateries on Diners, Drive Ins and Dives.” While Harder cannot disclose the details of his Girl Scout Cookies Championship episode prior to its air date, he did tell us that his favorite Girl Scout cookie is the new S’mores flavor (the version made by ABC Bakery is vegan) and that he enjoys Thin Mints, particularly when they’re crumbled into popcorn. “I’m not the first vegan chef to appear on Food Network (a list of which I am truly honored to be on now), and I’m absolutely thrilled to know I won’t be the last,” Harder said. “The mainstream public is craving the content on platforms they can rely on and trust, and I’m hopeful Food Network and others continue to expand.”