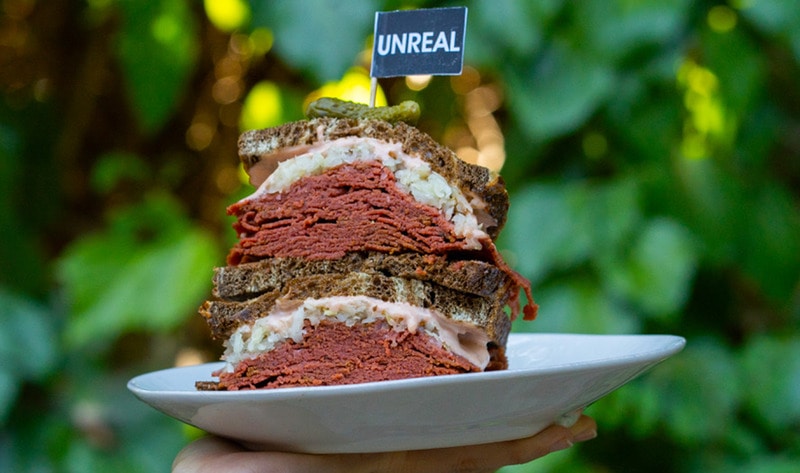 Vegan corned beef from Mrs. Goldfarb’s Unreal Deli is now served at Netflix’s Sunset Bronson Studio Lot in Los Angeles. Served inside sandwiches and as corned beef hash, the vegan meat is available to the media giant’s employees and catered to its sound stages. Approximately 1,000 individuals eat at the Studio Lot’s commissary, and about 10 to 15 percent of the lunch crowd chooses the vegan options. Last May, the Unreal Deli options also became available to the 3,000 employees of 20th Century Fox’s Studio Lot in LA. The partnerships came about after Unreal Deli owner Jenny Goldfarb reached out to the television and movie studios directly, and they responded with interest. “When I had that first meeting at Fox, they told me: ‘It used to be the actors wanting vegan options; now the seasoned executives are demanding it, too,’” Goldfarb told VegNews. “The response has been very well received. They often take large quantities for special events.” Mrs. Goldbarb’s Unreal Deli recently received funding from Shark Tank’s Mark Cuban, who invested $250,000 in exchange for 20 percent of the company. Its Unreal Corned Beef is also available in the grab-and-go section of 58 Whole Foods Markets in the Southern Pacific Region, at select locations of Quiznos in the Denver, CO area, and on menus at Los Angeles delis, including Canter’s Deli, Factor’s Famous Deli, and Art’s Deli. Last month, Sarge’s Delicatessen & Diner in New York City added a vegan Reuben sandwich featuring the Unreal Corned Beef to its menu.