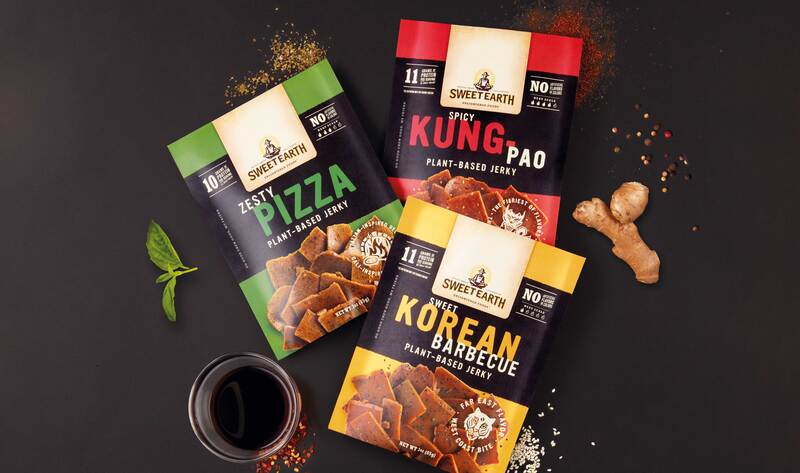 Vegetarian brand Sweet Earth will debut 13 new plant-based products at supermarkets nationwide starting this spring. The new items include a line of seitan-based vegan jerky in Sweet Korean BBQ, Zesty Pizza, and Spicy Kung Pao flavors. The brand—which Nestlé acquired for an undisclosed amount in 2017—will also debut vegan entrée bowls, two flavors of which are made with its newly launched Mindful Chik’n (Kung Pao Chik’n and Chik’n Fajita) and two flavors of which are made with its Awesome Grounds vegan beef (Mongolian Beefless and Pasta Puttanesca). The launch will include a line of previously announced plant-based deli slices in Oven Roasted Turkey, Black Forest Ham, and Italian Style Pepperoni flavors and a new sausage line in three varieties: vegan cheese-stuffed Green Chile Chedd’r, Ginger Scallion, and Chik’n Apple. “This year is all about providing consumers a wide variety of convenient, flavor-forward and plant-based options from morning to night so they can eat well throughout the day without compromising on taste,” Ryan Riddle, Senior Product Development Specialist of Vegetarian Meal Solutions at Nestlé, said. “Sweet Earth is focused on continuously innovating vegetarian foods that are delicious above everything else—from sausages you can grill, to deli slices you can create a sensationally drool-worthy sandwich with—our end goal is for people to savor the experience of eating plant-based.” Sweet Earth plans to offer the new products in both packaged form and from a separate deli counter emblazoned with the phrase “The Vegan Butcher” in-store at supermarkets.