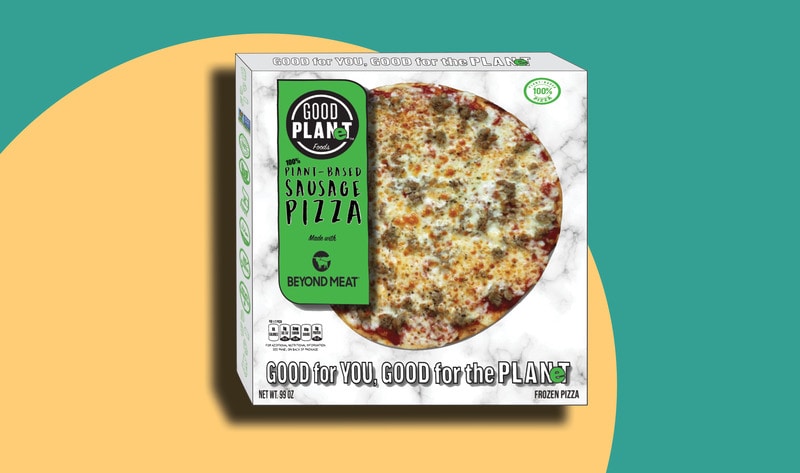 This spring, Washington-based vegan brand GOOD PLANeT Foods will launch a new frozen pizza at major retailers nationwide. The Plant-Based Frozen Pizza ($9.99) features GOOD PLANeT’s coconut oil-based cheese and is topped with vegan sausage made by Beyond Meat. “We’re proud to be able to introduce our new Plant-Based Frozen Pizza with ingredients we can really stand behind, including our own plant-based cheese and Beyond Meat,” GOOD PLANeT Foods CEO David Israel said. “Not only does our newest offering bring plant-based pizza lovers an alternative with exceptional flavor and absolutely no compromise, but it also delivers a truly delicious way to experience pizza … with ingredients that are environmentally and health conscious.” In addition to the new pizza, GOOD PLANeT currently produces several varieties of vegan cheese in shreds (Mozzarella, Smoked Mozzarella, Paremsan, and Cheddar); and slices (American, Garlic & Herb, Smoked Provolone, Cheddar, and Hot Pepper). The company has not yet announced which retailers will carry its new frozen pizza but is currently onboarding major partners, including Kroger, Walmart, and Costco. On March 1, fast-food chain White Castle began testing vegan cheddar cheese made by GOOD PLANeT Foods as a complementing option to its Impossible Slider (also available to order on any slider) at its locations in New York and New Jersey.

The Devastating Effects of Wildlife Poaching