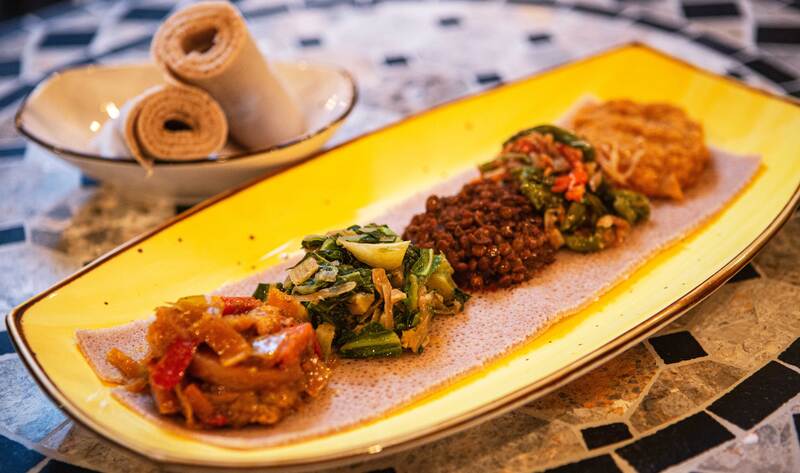 On March 7, new organic Ethiopian restaurant Ras Plant Based will open in the Crown Heights neighborhood of Brooklyn, New York. Chef Romeo and Milka Regalli fell in love at non-vegan Ethiopian restaurant Awash, which was owned by Milka’s family, and eventually took over the space. The new restaurant concept was created as a welcoming space and features rope lamps, a green wooden bar, an Ethiopan hut, and brightly colored images of Ethiopian men and women drawn by artist Ras Terms, who was flown in from Miami to create the artwork. Ethiopian-born Romeo crafted the menu to reflect recipes inspired by the couple’s great grandmothers, alongside modern interpretations of traditional dishes. “Ras Plant Based signifies our transition (which is still happening) towards a plant-based lifestyle. There are so many misconceptions about vegan food being too expensive or not flavorful enough,” Chef Romeo told VegNews. “Also, seeing how much of our world is affected by the consumption of meat, we felt like now was the right time for us.”

The crux of the menu revolves around the Ethiopian Platter (prepared as a single portion or served as a shared platter) which features traditional Ethiopan flatbread injera which comes topped with a variety of dishes such as Gomen (braised collard greens); Missir (fiery red lentil stew spiced with berbere); Minchet Abish Wat (traditional stew made with pea protein instead of beef); and Yatakilt Alicha (a cabbage and carrot medley that is made with non-traditional bell peppers). The menu also offers reimagined vegan versions of meat-centric dishes such as Kitfo, a kebab made with spiced Impossible Meat. In addition to lunch and dinner, Ras Plant Based also serves brunch, where items such as Chicken & Waffles and Fish and Grits get an Ethiopian (and vegan) twist and are served alongside desserts from vegan shop Rawsome Treats and creative mocktails (such as the Cold Fashioned, which swaps alcohol for cold-brewed coffee) prepared by mixologist Hadassah “Daisy” Austin.

To create a community space, Ras Plant Based will host traditional Ethiopian coffee ceremonies that encourage friends, relatives, and neighbors to interact while coffee beans are washed, roasted, ground, and prepared into coffee in front of everyone. “Conveying a sense of community is important to us because that is what Ethiopian culture is about,” Chef Romeo said. “In Ethiopia, even if you have very little, you share it with family and friends.”

Study Finds Environmental Impact of Meat Versus Vegetables is Staggering