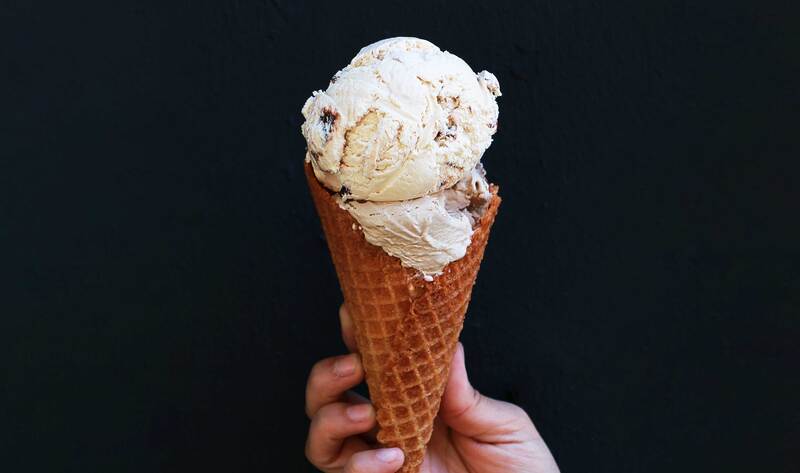 This month, Los Angeles-based vegan doughnut shop Donut Friend will open a new all-vegan ice cream shop Creamo in the city’s Silver Lake neighborhood. Donut Friend owner Mark Trombino began testing his house-made vegan ice cream at his two Donut Friend locations prior to creating the dedicated ice cream parlor. The new 600-square-foot space will serve 16 soy-based ice cream flavors at a time, including vanilla, chocolate, strawberry, orange creamsicle, corn, lemon poppyseed, espresso bean, rocky road, Thai ice tea, cookie butter, peanut butter, banana, butter pecan, and cookies & cream. Creamo will also offer milkshakes, sundaes, Donut Friend doughnuts, and doughnut sandwiches. The shop will also soon offer grab-and-go pints and ice cream cookie sandwiches. “Ice cream has always been a huge passion of mine—more so than doughnuts if you can believe that; however, I haven’t really found any vegan ice cream that knocks me out, and that was a bummer,” Trombino told VegNews. “So I decided to see if I could come up with my own … I was looking for something that didn’t taste like an alternative milk, and was rich and creamy and had the mouth feel of a dairy ice cream.” Donut Friend debuted in 2014 and expanded to a second location in 2018, serving doughnut flavors such as Custard Front Drive (a raised doughnut filled with Bavarian cream and topped with chocolate glaze) and S’Morrissey (a chocolate cake-filled doughnut accented with torched marshmallows, graham cracker crumbs, and a chocolate glaze).

Firefighters Rescue a Beagle Who Was Trapped Under a Pickup Truck