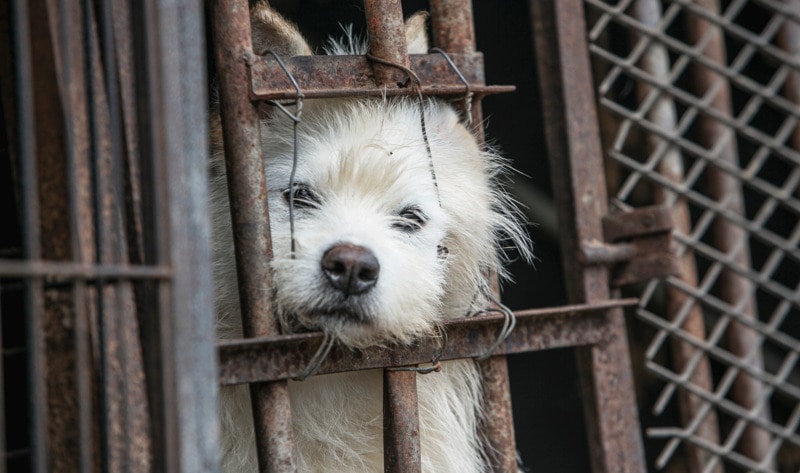 This week, Shenzhen became the first city in China to ban the consumption and trade of dogs and cats as part of its new legislation Shenzhen Special Economic Zone Regulations on the Comprehensive Ban on Wild Animals which also prohibits the breeding, sale, and consumption of protected wildlife species such as snakes and lizards. The law goes into effect on May 1 and breaking it comes with hefty fines of up to 150,000 yuan ($21,126). “Dogs and cats as pets have established a much closer relationship with humans than all other animals, and banning the consumption of dogs and cats and other pets is a common practice in developed countries and in Hong Kong and Taiwan,” a Shenzhen government spokesperson said. “This ban also responds to the demand and spirit of human civilization.”

The decision comes amid the COVID-19 pandemic that is thought to have originated in a “wet” animal market in Wuhan, China late last year. Animal-rights organization Humane Society International (HSI) has campaigned against the dog- and cat- meat trade for years and welcomes the ban as a groundbreaking moment. “With Shenzhen taking the historic decision to become mainland China’s first city to ban dog and cat meat consumption, this really could be a watershed moment in efforts to end this brutal trade that kills an estimated 10 million dogs and 4 million cats in China every year,” HSI China Policy Specialist Peter Li, PhD said. “Although World Health Organisation advice is clear that dogs and cats pose no known coronavirus threat whatsoever, it’s no surprise that attention is turning to this trade at this time because it undoubtedly poses a huge human health risk for other diseases such as rabies, as well as causing immense animal suffering.”

The new ban does not include animals traditionally raised for “livestock” such as pigs, cows, sheep, donkeys, rabbits, chickens, ducks, geese, pigeons, and quail, even though many zoonotic diseases such as H1N1 (pigs), H5N1 (geese), and Swine Flu (pigs) have originated from some of these species.

Shenzhen’s ban was passed after China announced a permanent ban on the sale and consumption of wild animals in February in response to the spread of COVID-19. However, some reports indicate that wet animal markets—where wild animals are sold and slaughtered alongside traditional “livestock”—are now reopening in the country.