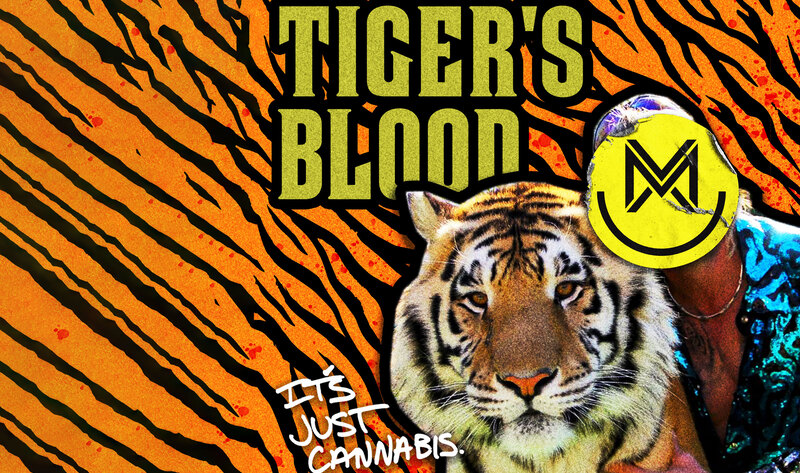 This week, multi-state cannabis brand Moxie released new marijuana strains inspired by controversial Netflix series Tiger King at dispensaries across California. The new strains are Tiger’s Blood (a cross between Goobers and Wildfire strains which boasts a citrus flavor); and Cool Cats Cush (a cross between Wildfire and Wedding Cake strains which the company describes as “grassy” and “piney”). A stock of 1,600 grams of each strain (sold in one-gram increments) is available across California dispensaries and Moxie will donate $1 for every unit sold to Tiger Protection Fund—a World Wildlife Fund-supported effort to bring awareness to the plight of tigers in the illegal wildlife trade.

“The series shed light on the terrible living conditions and deplorable exploitation of tigers in captivity,” Moxie Head of Marketing Tessa Adams told VegNews. “We felt compelled to pair with the World Wildlife Fund for this project because our mission is to give back in whatever meaningful ways we can. We hope that people don’t forget about the animals, as they became our primary focus as the season went on.” Moxie’s release was timed with Netflix’s announcement that it will air a new Tiger King episode—the exact date of which is not yet set.

The show gained popularity for its portrayal of the feud between Oklahoma roadside zoo owner Joe Maldonado-Passage (known as “Joe Exotic”) and Carole Baskin, owner of Florida sanctuary Big Cat Rescue. While the Netflix series focused on quirky “cat people” characters and outlandish plot twists, it also—to some extent—revealed the cruel underbelly of the thriving wild cat trade in the United States, much of which is perpetuated by Exotic and other characters such as Bhagavan “Doc” Antle. In a recent blog post, Baskin slammed Netflix for downplaying the cruelty endured by tigers, lions, and other animals at the hands of wildlife breeders and roadside zookeepers.

This week, The Humane Society of the United States (HSUS) released never-before-seen footage captured in 2011 during its thorough investigations of Joe Exotic’s G.W. Zoo, showing the zookeeper punching cubs in the face, dragging them by the tail, and other forms of abuse in an effort to “train” them to cooperate in photo opportunities with tourists. “Facilities like Joe Exotic’s and Doc Antle’s masquerade as rescue or conservation operations, but in fact they breed tigers and subject the cubs, who are torn from their mothers immediately after birth, to stress and abuse,” HSUS CEO Kitty Block said.

HSUS and Baskin are both calling upon those concerned about big cat cruelty to support the Big Cat Public Safety Act, legislation that aims to ban ownership of big cats and the use of cubs for photo opportunities.

Coronavirus is Spreading Through Rikers Island Jail and Infecting Guards

Australian Athletes Come Together to Demand Action on Climate Change