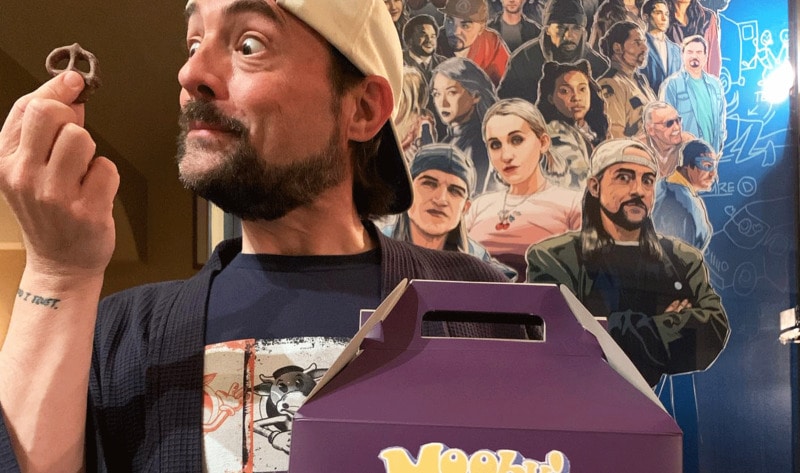 Director Kevin Smith is opening a real life version of Mooby’s—a formerly fictitious fast-food restaurant that made an appearance in several of his films, including Dogma, Clerks 2, and Jay and Silent Bob. From April 19 until April 25, the restaurant will operate in the Los Angeles area as a delivery-only pop-up through Postmates, serving chocolate-covered pretzels, Hater Totz, and Messy Lasagne Sandwiches—with vegan options available. Each meal will come with a “toy surprise,” or an autographed card from Smith’s newest film Jay and Silent Bob Reboot which can be used as front-row pass to the physical pop-up once it opens post-pandemic. Proceeds from the meals will go to support No Us Without You, an organization working to provide meals to families affected by the COVID-19 pandemic.

“Ever since I put my first Mooby’s in my fourth film Dogma, I’ve always dreamed of taking the fictional food eatery into the real world,” Smith told Deadline. “Now, the team behind Saved by the Max (a pop-up restaurant concept based on hit ‘90s show Saved by the Bell) is making that dream a reality, complete with the money raised going to benefit No Us Without You. And then, maybe one day when this pandemic passes, we’ll open the doors on an actual pop-up Mooby’s for real.”

With the help of his vegan daughter, actress Harley Quinn Smith, the acclaimed director went vegan in 2018 after surviving a “widow-maker” heart attack. Since, Smith has been an avid proponent of veganism and in a 2019 video produced by animal-rights group Mercy For Animals, admitted that the lifestyle reconciled with his childhood love of animals.