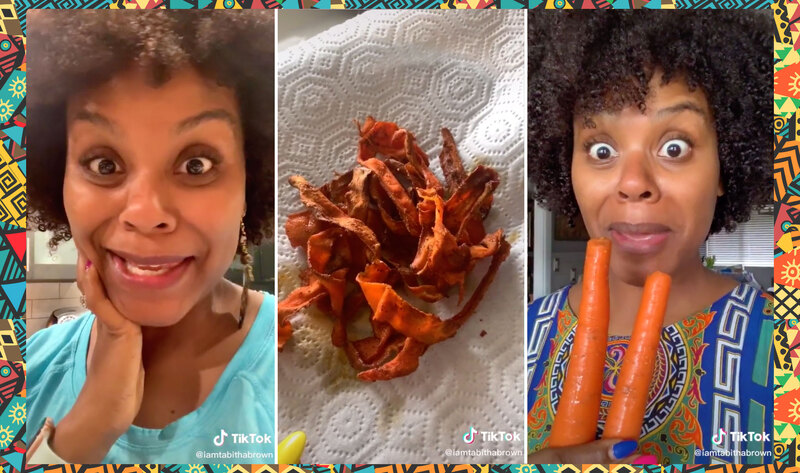 Vegan influencer Tabitha Brown reached one million followers on social media platform TikTok in less than one month after launching her account on March 7. In 2017, Brown decided to go vegan after watching documentary What the Health to combat her struggle with chronic pain. In 2018, Brown became a viral sensation after posting a video of herself eating a Smoky TTLA sandwich—a vegan BLT made with tempeh, tomato, lettuce, avocado, and Brown’s addition of a pickle—she bought from a Whole Foods Market deli counter. Her video inspired countless fans to request that the TTLA be available at their local store, quickly influencing Whole Foods to add the vegan sandwich to its stores nationwide. The grocery chain even named Brown its BFF & Plant-Based Brand Ambassador shortly thereafter.

Brown tells VegNews that her vegan journey, from eating a sandwich in her car to reaching millions of fans, has taught her a few key lessons. “It has taught me that life is full of surprises,” Brown said, “and if you stay consistent, authentic, spread love, inspiration, and good food, the surprises will continue to blow your mind in the most amazing way.”

Since the viral sandwich video, Brown has turned to helping others thrive by producing engaging vegan content, including regular Facebook Lives such as “Very Good Mondays” (where Brown and her daughter Choyce review vegan products made by small businesses); “Fridays with Tab and Chance” (where Brown and her newly vegan husband Chance chat about their lives); and weekly cooking demonstrations—which always start with Brown’s warm welcome, “Honey, come on in the room”—that attract thousands of viewers. With a gentle push, Brown encourages people to try her recipes to help them along their own journey. “I want people to know it’s a process like anything else. To take it day by day and don’t be hard themselves,” Brown said. “I hope to grow internationally and reach more people with good vegan food, love, light, and laughter.”

On TikTok—where Brown now has nearly two million followers—and Instagram, Brown shares shorter-format videos, such as her simple recipe for vegan carrot bacon which is now going viral. Just this week, Brown made an appearance on a virtual version of ABC talk show Strahan, Sara, and Keke, was spotlighted by media outlet Because of Them We Can, and promoted by Buzzfeed’s food arm Tasty on Instagram. Brown was also chosen by our readers as their favorite Vegan Social Media Personality during the 2020 VegNews Veggie Awards—revealed in our Best of Vegan issue, which is hitting the stands now.

KFC Teases Launch of Beyond Meat Vegan Options in China