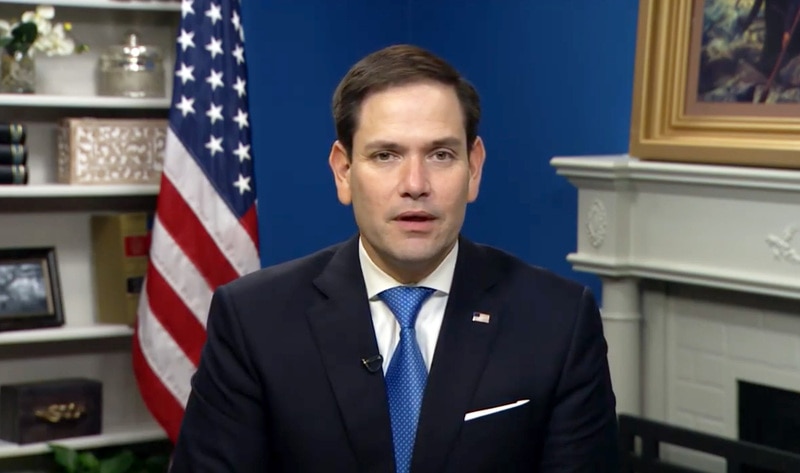 Today, Senator Marco Rubio (R-FL) admitted that Americans should turn to plant-based meat due to the ongoing COVID-19 pandemic during an appearance on television show Fox and Friends. The United States is currently in the midst of a meat shortage caused by the closure of 20 slaughterhouses, including Tyson’s largest pork plant, after a high number of meat workers tested positive for COVID-19. Despite Trump’s April 28 executive order to reopen all slaughterhouses, the shortage has already affected both the foodservice and retail industry, with fast-food chain Wendy’s removing beef—it’s signature menu item—from some of its menus and retailers, including Costco, Publix, Sam’s Club, and others, limiting the number of meat products customers could purchase at once.

“Unlike other supply chain issues, this has nothing to do with anyone overseas. This has to do with how many people can you make work inside one of these processing plants—they’re all very close to each other and there’s a public health risk,” Rubio said. “So there’s been disruptions there. I know people are working hard to get that resolved. In the meantime, I guess we’ll have to go a little vegan, right?”

The public health risk Rubio speaks about was recently highlighted by a lawsuit filed against meat giant Smithfield by an anonymous slaughterhouse worker in partnership with nonprofit Rural Community Workers Alliance (RCWA). “Workers can go several hours performing grueling, monotonous work, shoulder to shoulder, and sometimes even touching their coworkers, often without time to even cover their mouths when they sneeze or cough, and without any time to wash or sanitize their hands,” the lawsuit—filed in Milan, MO, where the anonymous worker is employed—states.

Earlier this month, the League of United Latin American Citizens (LULAC)—the biggest and oldest Latino civil-rights organization in the country—called upon its community of 60 million members and all American consumers to boycott buying meat to bring awareness to the mistreatment of meat workers during the COVID-19 pandemic. “To confront the gross negligence of the meat corporations and government officials from both political parties, LULAC is calling for ‘Meatless May Mondays,’” LULAC President Domingo Garcia said. “Until the meat industry, federal, and state governments protect the lives of essential workers at all meat processing facilities in a federally mandated and verifiable manner, LULAC will call for boycotts of meat products.”

Luckily, this week, Beyond Meat plans to reduce the price of its vegan meat products and offer them in “value” pack formats and Kroger—America’s largest supermarket—is stocking plant-based Impossible Burgers at 1,700 locations, allowing many consumers to follow Rubio’s advice of going “a little vegan.”

Birdwatchers on the Lookout for the Common Swift

Eat by Color: Tasty and Cute Pink Vegan Recipes Made with Strawberries, Cherries, Beets and More!