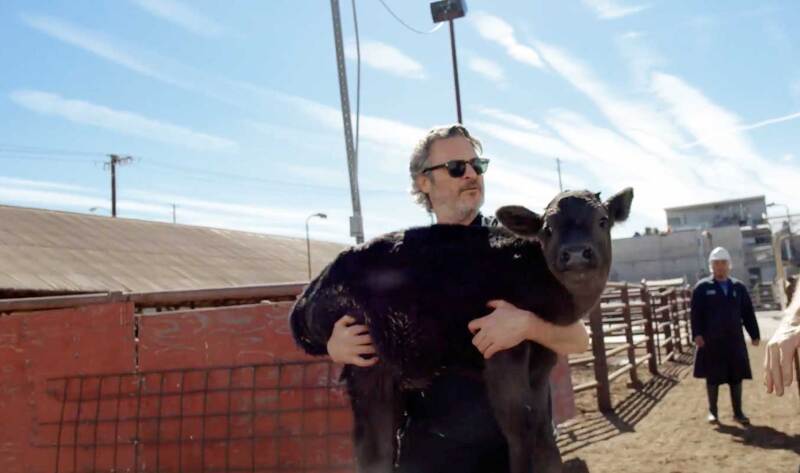 Vegan actor and activist Joaquin Phoenix is backing a unique Mother’s Day gift idea: a donation in your mom’s honor to support rescued cow Liberty and her calf Indigo. One day after winning the Oscar for his role in Joker in February—and delivering a historic, animal-rights focused acceptance speech—Phoenix headed to slaughterhouse Manning Beef in California to facilitate the rescue of Liberty and Indigo (who was then only a week old). Phoenix negotiated the release of the animals from the slaughterhouse alongside a group that included fiancée and fellow activist Rooney Mara, both his and Mara’s mothers, Earthlings director Shaun Monson, Los Angeles Animal Save Founder Amy Jean Davis, and Farm Sanctuary President and Co-founder Gene Baur.

Now, Liberty and Indigo are living at the Acton, CA location of Farm Sanctuary, where they will be spending their first Mother’s Day together this Sunday. “It’s impossible not to smile at the love that radiates from Liberty for her calf, Indigo, or the marvelous curiosity they share for their new life roaming spacious land in permanent sanctuary. Thanks to generous supporters like you, Liberty is able to nurse Indigo, bond with her, protect her, and watch her grow up—just as nature intended,” Phoenix said. “Although we cannot rescue our way out of animal agriculture, I hope you will always know Liberty and Indigo as living embodiments of liberation and as ambassadors for a compassionate vegan lifestyle.”

In celebration of Mother’s Day, Phoenix urges fans who are able to “adopt” the pair by donating $35 (or more) to support Farm Sanctuary’s life-saving efforts.

From Crunchy Mediterranean Salad to Emerald Kale Detox Soup: Our Top Vegan Recipes of the Day!

10 Best Houseplants for Improving the Air Quality In Your Home