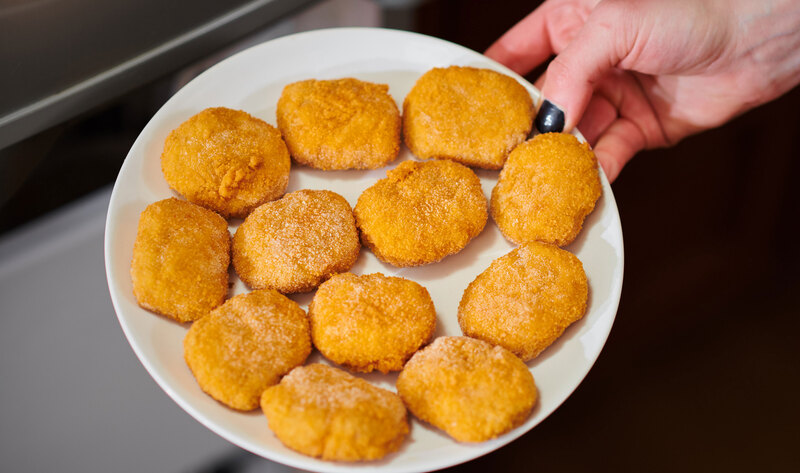 Next week, startup Rebellyous Foods will make the retail debut of its first product, vegan chicken nuggets, at grocery stores Leschi Market and Vegan Haven in Seattle. Rebellyous Plant-Based Nuggets will be sold frozen in one-pound packs (five servings) for a suggested retail price of $5.99.

Rebellyous was founded by Christie Lagally—the former senior scientist at food-advocacy firm The Good Food Institute—with the aim of developing affordable vegan products for the food-service sector while creating machinery that can be used by other plant-based companies to help scale their production. In 2018, the company secured $1 million in funding to create its vegan chicken nuggets—made from textured wheat, chicken-less flavoring, cornstarch, oil, and corn breading—using a proprietary processing technique that creates a texture comparable to its animal-derived counterpart. Since February 2019, Rebellyous has supplied its vegan nuggets to schools, corporate cafeterias, hospitals, and universities in the Pacific Northwest and San Francisco Bay Area regions.

“Kids love our nuggets because they’re delicious. Parents love them because they’re more nutritious than their animal-based counterparts and they’re simple to prepare,” Lagally said. “Since day one, fans have been asking where they can purchase our nuggets to enjoy at home and we’re thrilled to offer this opportunity for them to do so, while staying true to our mission of offering plant-based meat for all by starting with affordable family-sized packs”

Rebellyous—which raised $6 million in investment capital in April—plans to expand its product portfolio and launch in additional West Coast retailers later in 2020.

Is Kim Kardashian’s Beauty Brand Going Vegan? Here Is What We Know.