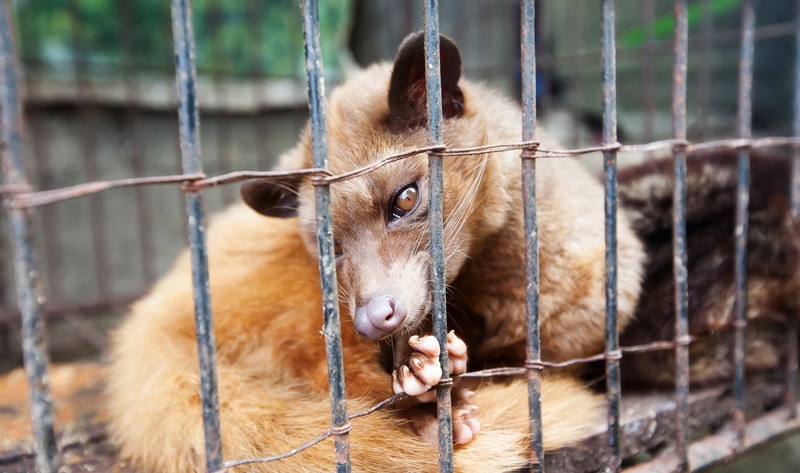 Wildlife farmers in the Hunan and Jiangxi provinces of China are being offered a government buy-out to help them move away from breeding wild species for consumption. The buyout is part of the government’s transition strategy for farmers as they crackdown on the wildlife trade in the wake of the COVID-19 pandemic. The initial rollout covers 14 species of farmed wildlife and offers farmers subsidies for each species, such as $88 per porcupine; $84 per civet cat; $17 per kilogram of cobra, king rattle, or rat snakes; $10 per kilogram of bamboo rat; $53 per wild goose; and $346 per Chinese muntjac deer. The funds will give farmers the means to transition to alternative livelihoods such as growing fruit, vegetables, tea plants, or herbs for traditional Chinese medicine. However, it is unknown what the government plans to do with the wildlife once rescued. The proposed options include the release of animals into the wild in suitable and non-residential habitat; utilization by other industries such as zoos, laboratory research, and traditional medicine; or mass culling.

“By subsidizing wildlife breeders to transition to alternative livelihoods, these provinces are demonstrating global leadership on this issue, which other provinces and countries must now follow,” Peter Li, Humane Society International’s China policy specialist, said. “Chinese farmers not only have an opportunity to leave a trade that poses a direct threat to human health—something that can no longer be tolerated in light of COVID—but also to transition to more humane and sustainable livelihoods such as growing plant foods popular in Chinese cuisine.”

In February, the Standing Committee of China’s National People’s Congress approved a permanent nationwide ban on the consumption and illegal trade of wild animals—an industry that is estimated to be worth $74 billion. Since then, four cities—Beijing, Shenzhen, Zhuhai, and, most recently, Wuhan—have implemented their own bans on the sale and consumption of wild animals.

Miley Cyrus on Ditching Veganism: “I Think When You Become the Face of Something, It’s a Lot of Pressure.”

From Quit-the-Cluck Nuggets with Mustard Chive Sauce to Pizza Dough Cinnamon Rolls: Our Top Eight Vegan Recipes of the Day!