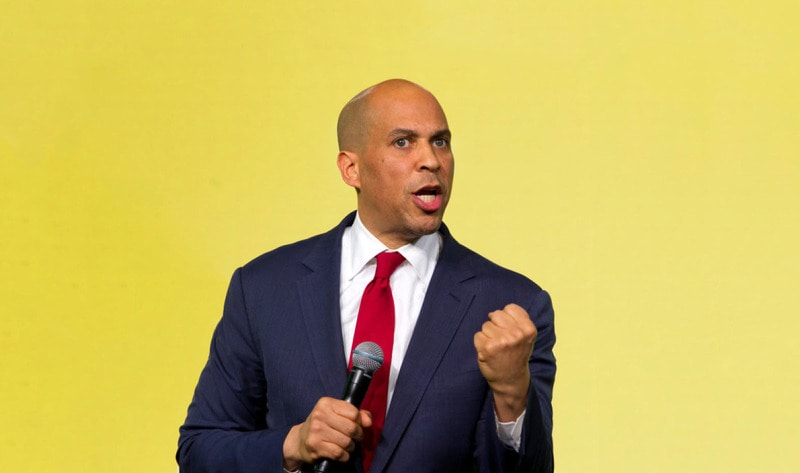 Today, vegan New Jersey Senator Cory Booker and several fellow Senate members sent a demand letter to members of the United States Congress to slow down the speed at which animals are slaughtered for food, particularly during the COVID-19 pandemic. The letter asks Congress to issue a directive demanding that the US Department of Agriculture Food and Safety Inspection Services (USDA FSIS) stop allowing the increase of the speed at which chickens, cows, and pigs are slaughtered. During the pandemic (specifically between March 26th and April 20th), the USDA FSIS approved 17 requests from slaughterhouses to increase kill speeds. In chicken slaughterhouses, the kill speed increased from 140 birds per minute to up to 175 birds per minute.

In their letter, the Senators also plead that Congress stop the implementation of the New Swine Slaughter Inspection System—which obliterates all slaughter line speed caps on pigs, allowing slaughterhouses to run the line at any speed they choose, regardless of the consequences to workers and animals. “Rather than increasing line speeds, the USDA should be working with processing plants to slow down line speeds in order to accommodate social distancing measures aimed at reducing the spread of the virus in such plants,” the Senators state.

This month, COVID-19 infections among slaughterhouse workers at the three largest meat producers in the country—Tyson Foods, Smithfield Foods, and JBS—have skyrocketed from 3,000 to more than 11,000 positive cases, according to a recent analysis by The Washington Post. At least 63 workers have died as a result and many have spread the disease to their communities.

Animal-rights group Mercy For Animals (MFA)—which was part of a coalition of organizations that sent a similar letter to Congress on May 4—supports the Senators’ requests and asks that Congress make this directive a part of the HEROES Act, the next coronavirus relief package on which the Senate is expected to vote in the coming days.

In support of the Senators’ demand, MFA released its most recent undercover investigation—footage of which is narrated by vegan actress Alicia Silverstone—that depicts the cruelty and danger that high-speed slaughter poses to both animals and humans. MFA conducted the investigation in late 2019 at an Amick Farms slaughterhouse in Hurlock, MD, which at the time of the investigation supplied Walmart-owned big-box chain Sam’s Club. There, investigators found birds hastily hung upside down by their legs on a rapid live-shackle line; workers—who were standing shoulder-to-shoulder—required to work at an extremely fast pace increasing the risk of injury; and injured and sick chickens thrown away or kept on the line for slaughter. At one point, an MFA investigator documented chickens who were awaiting slaughter left hanging upside down in leg shackles for an hour during a plant power outage.

“COVID-19 has shined a spotlight on the immense suffering animals and slaughterhouse workers endure for cheap meat,” MFA President Leah Garcés said. “High-speed slaughter lines increase the risk of human error that results in the slaughter of fully conscious animals. They also force workers to stand close together, making slaughterhouses hotspots for the spread of COVID-19, which also endangers surrounding communities. Mercy For Animals, along with 21 other organizations that protect workers, consumers, and animals, is calling on Congress to prohibit higher-speed slaughter of birds, pigs, and cows. We must transform our inefficient, inhumane, and unsustainable food system. We can start today by passing this commonsense legislation.”

MFA directs concerned citizens to take action in support of these demands through its campaign website High Speed Cruelty.