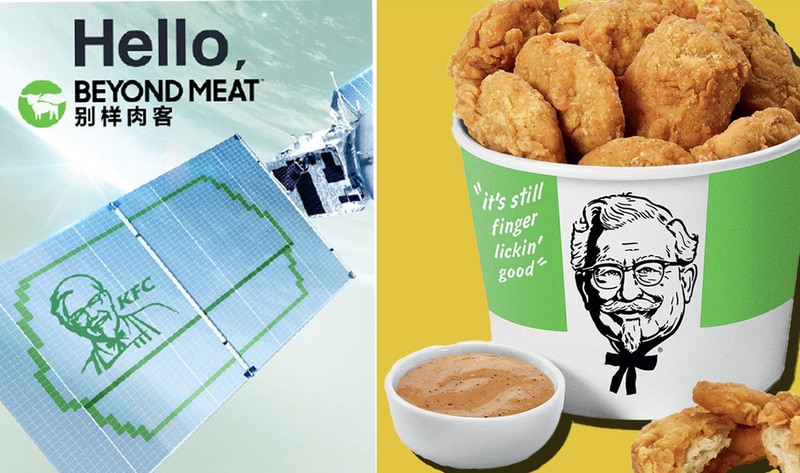 New vegan Beyond Meat options may be on the way at Kentucky Fried Chicken (KFC) outlets in China. The international chain took to Chinese social media platform Weibo to announce the forthcoming partnership. “Looking forward to exploring a new journey in the food world together! #NewKFCEnergy. See you in June!” KFC China posted, tagging Beyond Meat on Weibo. KFC China also shared a graphic depicting the Beyond Meat logo above a space satellite printed with a KFC box.

KFC’s Beyond Meat partnership will be the second time the chain has introduced vegan meat options in China. From April 28 to April 30,  KFC China tested plant-based chicken nuggets made by agribusiness giant Cargill at three locations: Shanghai, Guangzhou, and Shenzhen. In Shanghai, the vegan nuggets sold out within an hour and 7,000 portions were purchased during the trial period. After the success of the trial, Cargill announced it will launch new vegan meat brand PlantEver across China in June.

Stateside, KFC offered vegan Beyond Fried Chicken at one location in Atlanta last August—where it sold out in less than five hours, prompting KFC to expand the option to nearly 70 test locations in Charlotte, NC, Nashville, TN, and surrounding areas in February.

Urge the Food and Drug Administration to End Cruel Animal Testing and Research!