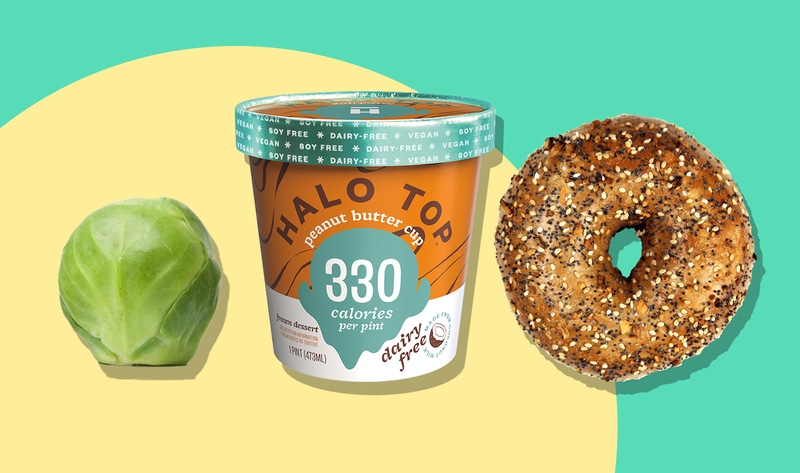 This pandemic has made me question many things. Among the more obvious things I’ve asked myself (such as, “Do I need to sterilize my debit card?” and “Why is there still no toilet paper?”), I’ve found my mind lingering on the very pressing question, “Why the heck aren’t freezers bigger?” From frozen veggies to leftovers, I’ve admittedly been playing a constant game of Tetris, attempting to fit what I consider essentials into my regular-sized freezer. These go-to foods act as a supplement to disappointingly tiny takeout meals, come to the rescue when I work late and forget to order in, and offer late-night comfort in the form of a frozen treat. Here are the seven freezer-friendly items no vegan freezer should exist without.

1. Frozen Brussels sprouts
Some may consider it odd, but I prefer frozen Brussels sprouts to the fresh kind. You don’t have to cut off the ends, the outer leaves don’t fall off, and they always turn out tender in the oven (whereas fresh sprouts are at risk of burning and drying out). Season with salt, oregano, and thyme, pop the sprouts in the oven at 400 degrees, and twenty minutes later you have a healthy snack or side dish you can unapologetically eat with your hands if you live alone.

2. Pint of vegan ice cream
I can take down a pint in one sitting, but more often than not, I end up slowly working my way through a few glorious bites at a time. I’ll admit to falling into the low-calorie ice cream trend—the Halo Top Dairy-Free Peanut Butter Cup and Arctic Zero Non-Dairy Brownie Blast are more than decent, especially considering they’re both under 330 calories. However, any flavor of Nada Moo and the new Alden’s Organic Dairy-Free Ice Cream are also regular residents of my freezer.

3. Homemade bagels
Since February, I have been on a homemade bagel kick, and whenever I run out, I feel compelled to make more. Whether you’re freezing your homemade bagels for later, or you bought some during your monthly trip to the grocery store and are storing them for safe-keeping, these glorious foods are perfect for sopping up soup or pairing with salad to round out an evening meal. That’s correct—I eat bagels for dinner. Just try it.

4. Cashews
Unless you go through a bag of cashews in a few weeks, store them (and all nuts) in the freezer—they’ll last longer. I mainly use cashews for making raw(ish) cheesecakes and pies. This Blood Orange Cheesecake even converted my omnivorous roommate to vegan desserts, and he now calls dairy “Devil’s juice.”

5. Frozen bananas
Never throw away another banana again. When the bunch starts to go south, I peel, slice, and freeze them. My frozen bananas typically transform into Chocolate PB2-infused “nice” cream, but they’re also great to have on hand when a recipe calls for bananas (they’re used in more than just banana bread, such as in this uber moist pumpkin roll).

6. Frozen spinach
Watching a full bag of fresh spinach wilt down to a fraction of its original volume is depressing, which is why I depend on the frozen variety that is pre-wilted. It bulks out tofu scrambles, veggie stir-frys, and soups without being decimated by the heat. I’ll also throw it in my banana nice cream—you really can’t taste it!

7. Native Foods Wellington or Roast
When I am fastidiously working from home and refuse to pay someone to deliver food to me, I rely on this hearty meal-in-one. It’s perfect when paired with roasted frozen Brussels sprouts or freshly steamed kale if I have some on hand. Once a seasonal offering, the Wellington has returned to the menu amongst the new takeout culture. The massive puff-pastry-encased meal provides me with at least five servings, and it lasts for months in the freezer. Sometimes, you just need a taste of the holidays on a random Tuesday.

Attention White Animal-Rights Activists: “Black Lives Matter” is Not Ours For the Taking