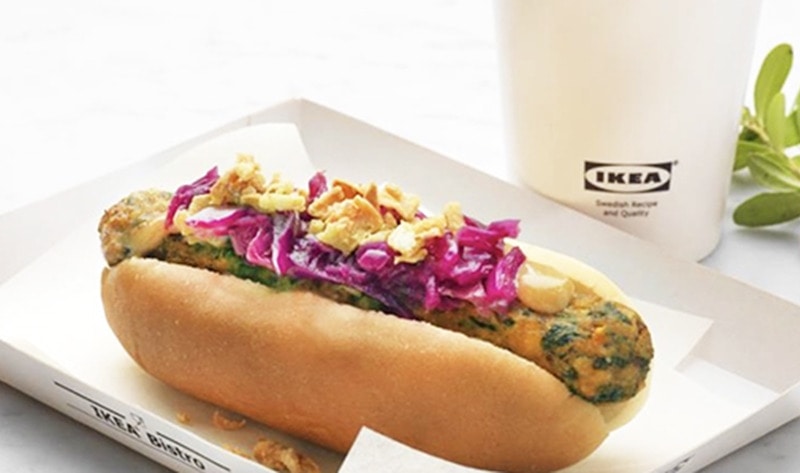 This week, furniture retailer IKEA launched a veggie hot dog at its locations in New South Wales and Canberra in Australia with other locations to be added soon. The hot dog (AUS $1) is made from kale, red lentils, carrots, and ginger, and comes topped with mustard, roasted onions, and pickled cabbage. The hot dogs are also available in packs of 10 (AUS $6.99) at all IKEA Swedish Food Market (its in-store grocery aisle) across Australia. According to local news outlet news.com.au, IKEA plans to add six additional plant-based menu options at Australian locations in the next 12 months and expects to sell 1.3 million veggie dogs per year.

It’s finally here. The $1 IKEA veggie hot dog. Available now in IKEA NSW stores and IKEA Canberra, and rolling out across all other stores very soon. Made with kale, red lentils, carrots and ginger, the yummy new hot dog will be served in a roll with roasted onions, pickled cabbage and mustard. You can also purchase a take-home pack of 10 for $6 from our Swedish Food Markets, available in all stores now.

In 2018, IKEA first tested a prototype of the veggie dog at one location in Sweden before expanding the offering to all European outlets—where it sold one million vegan hot dogs in two months. Shortly thereafter, IKEA expanded the vegan hot dog to all locations in the United States and Canada.

IKEA warns that while the hot dog is vegan, bun formulations vary depending on locations and customers should check with their local stores to confirm that its buns are free from animal products.