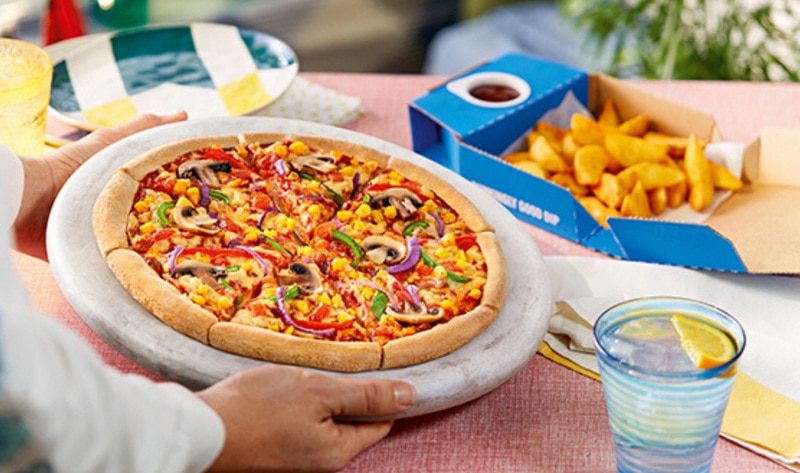 This week, Domino’s added two vegan pizzas to its menu at 46 test locations in the United Kingdom. The chain spent one year developing the new options, which include the Vegan Vegi Supreme (topped with mushroom, corn, onions, red peppers, and tomatoes); and Vegan Margherita (topped with vegan cheese developed in-house by Domino’s). The pizzas are made on a new hand-stretched vegan dough and can be customized with a variety of vegetable toppings. “Our vegan offering has been a while coming because we’re determined to make sure it’s full of our iconic Domino’s flavor,” Aman Prasher, Domino’s chief vegan dough developer, said. “We might not be first but we’re always the best—no compromises. Our dedicated pizza chefs are incredibly excited for our fans to try this new and improved latest dough as we believe we’ve nailed it.”

The vegan pizzas are available at the same price point as their animal-based counterparts and come with Domino’s vegan barbecue dip. Should the new pizzas prove successful at the test locations, Domino’s will roll out the vegan options to all of its UK locations.

In addition to the UK, Domino’s has added vegan pizza options in other regions, including Australia where it offers Follow Your Heart cheese and vegan beef specially developed for the chain by a local company. Stateside, Domino’s US CEO Richard Alllison revealed in January that it is in the process of internally testing plant-based protein toppings.

Robert Downey Jr. is Going Plant-Based for the Planet!