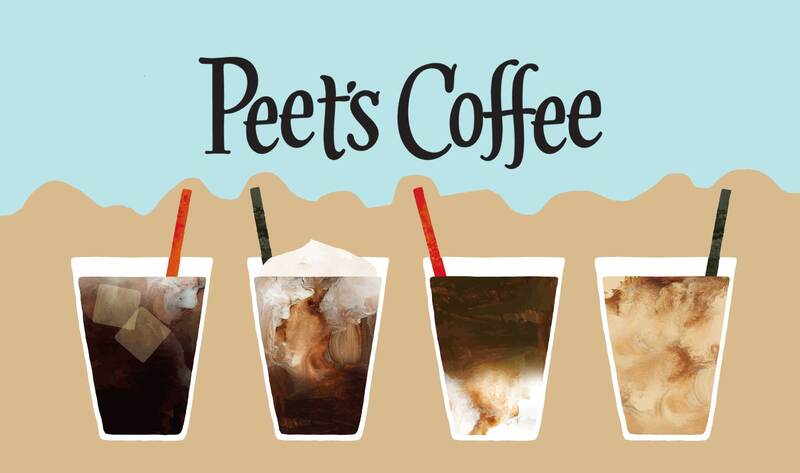 Peet’s Coffee and Tea is no Starbucks behemoth, but with nearly 250 stores across eight states and the District of Columbia, it’s definitely on the radar. The chain has made considerable strides toward propelling the vegan movement—its pastry case features several vegan-friendly goodies and it was one of the first major coffee chains to adopt plant milks beyond soy. However, quite a few of its signature beverages contain animal products where we couldn’t expect (stay away from the Havana Cappuccino, honey-themed drinks, Tea Fogs, regular Javivas, and Black Tie beverages). From secret menu items to standard cold brew, we’re here to guide you to the best vegan-friendly summer sips at Peet’s.

1. Iced Lavender Tea Latte
Part of the new summer lavender line, this slightly floral beverage contains the perfect amount of caffeine for an afternoon sip. Chilled Summer Solstice black tea is mellowed out with a pump of housemade lavender syrup and a generous splash of oat, almond, or soy milk.
Barista Tip: Experiencing some June gloom? This seasonal beverage is also served hot.

2. Iced Oat Milk Horchata Latte
No substitutions required, this cinnamony coffee beverage is vegan as it comes. Available hot or iced, creamy oat milk is blended with two shots of Peet’s bold espresso and mixed with cinnamon spices and Madagascar vanilla syrup.
Barista Tip: Past five o’clock? Take this home and add a shot of rum.

3. Iced Vanilla Cinnamon Latte
If you order this with oat milk, it’s no different than the horchata latte. It’s also the same price when ordered with almond or soy milk.
Barista Tip: Swap the vanilla syrup for hazelnut or caramel syrup. Both unexpected flavor pairings are delightfully good.

4. Iced Latte
An iced latte is essentially your favorite plant milk with a shot of espresso—you’ll get a caffeine jolt, but you’ll barely taste the coffee. Because most plant milks are sweetened, a liquid sweetener isn’t necessary. However, Peet’s caries vegan-friendly Monin syrups that are available to add to any beverage. Flavors include vanilla, hazelnut, caramel, and lavender. Note: the caramel syrup is vegan. The caramel sauce (used in the Caramel Macchiato) contains dairy.
Barista Tip: Ask for an extra shot of espresso to enjoy a stronger coffee flavor.

5. Iced Mocha
No need to fear dairy lurking in the chocolate sauce, Peet’s decadent iced mocha is vegan when ordered with plant milk.
Barista Tip: Ice takes up volume and waters down your drink over time. Ask for light ice to get more of the good stuff and to enjoy your drink longer.

6. Iced Espresso
Simple and straight to the point, an iced espresso is the fastest way to shock your system with caffeine.
Barista Tip: Ask for a splash of plant milk and you’ve got yourself an iced cortado—without the $0.70 upcharge for non-dairy milk.

7. Cold Brew Iced Coffee
Peet’s version of iced coffee isn’t hot-brewed coffee that’s stored in the fridge—it’s a genuine cold brew, meaning the grounds were steeped overnight in cold, filtered water. The effect is a smoother, more concentrated coffee that will rev your engine all afternoon.
Barista Tip: Be careful if you plan to add a splash of plant milk, as some varieties curdle in cold brew. Oat and soy tend to hold up the best.

8. Iced Café Au Lait
Think of this as a milkier version of an iced coffee with plant milk. The traditional café au lait combines equal parts coffee with steamed milk. In the chilled version, there’s no steaming involved. The result is a relatively no-frills coffee beverage that verges on the edge of a strong iced latte.
Barista Tip: Order with plant milk and you’ll save $1 instead of ordering an iced latte.

9. Cold Brew Fog
It’s not nitro, but the effect is similar. Peet’s signature line of Fog beverages involves whipping a small amount of ice with the company’s East African Baridi cold brew and a dash of chicory root. This whipping technique develops a creamy foam without the use of dairy. The drink is smoother than iced coffee but still brings a bold coffee flavor.
Barista Tip: Everyone should try this at least once. That foam is magnificent.

10. Cold Brew Fog Latte
Take the same whipping technique of the Cold Brew Fog and add milk into the equation, and you end up with a Fog Latte. Just be sure to ask for your favorite plant milk. The drink is stronger than an iced latte but not as intense as the straight Cold Brew Fog.
Barista Tip: Due to its extended brewing method, cold brew tends to have a more potent caffeine effect. Enjoy slowly.

11. Coconut Cold Brew Fog (and Latte)
For a taste of the tropics, opt for one of these coconut-infused chilly beverages. It’s the same Fog concept of whipped ice, chicory, and cold brew, but with a pump of coconut syrup added in to sweeten the experience.
Barista Tip: If coconut isn’t your jam, swap the syrup for vanilla, caramel, or hazelnut flavors.

12. Iced Matcha Green Tea Latte
Matcha isn’t going anywhere, and Peet’s is well aware. This once-seasonal beverage is here to stay.
Barista Tip: This beverage can be made with our without a pump of simple syrup. If you’re not a matcha purist, the drink exponentially benefits from a bit of sweetness.

13. Iced Chai Tea Latte
Unlike Starbucks, Peet’s chai latte is vegan-friendly (Starbucks’ contains honey). It’s a mildly sweet, spicy treat that’s not quite as caffeinated as coffee but still provides a brain boost.
Barista Tip: Make it a dirty chai by asking for a shot of espresso.

14. Iced Tea
Simple and refreshing, Peet’s offers iced versions of its Wild Berry Hibiscus (herbal), Summer Solstice (black), and Green Tropical teas. Help yourself to a few drops of simple syrup at the self-serve station; liquid sweetener (opposed to powdered) mixes better with cold drinks.
Barista Tip: You might be interested in trying one of the Tea Fogs, but don’t give in. Both the Hibiscus and Matcha Tea Fogs contain honey.

15. Javiva Light
The Javiva is Peet’s rendition of the Frappuccino. The blended drinks are made with ice, freshly brewed coffee, flavored syrup, and Javiva Blend. The regular Javiva Blend contains dairy, but the Light Blends are dairy-free and suitable for vegans. To order your Light Mocha or Light Coffee Javiva, ask for no whip, and swap in non-dairy milk.
Barista Tip: While these beverages would be perfect topped with a swirl of coconut whip, the chain discontinued this offering in 2019. If you’re looking for a fun topping, ask for a drizzle of chocolate sauce on top.

16. Iced American Flat White
Peet’s differentiates this niche beverage by combining a ristretto (aka a short, potent shot of espresso) with whole milk and pouring the mixture over ice. When ordered with plant milk, it’s hardly different than an iced latte, and it costs the same.
Barista Tip: This is part of the secret Loyalty Member Menu.

17. Lavender Cold Brew
Lavender and coffee? Just try it. The R&D team at Peet’s nailed it with this one.
Barista Tip: Another secret loyalty-members-only item, this floral sweet drink can easily be replicated by asking for a shot of lavender syrup in your cold brew.

18. Iced Lavender Matcha Latte
Despite the two very intense flavors of floral lavender and earthy matcha, this cool tea latte balances them exceptionally well. If you’re a matcha fan, this might become your drink of the summer.
Barista Tip: Not a loyalty member? You can still experience this unique drink by asking for a shot of lavender syrup in your iced matcha latte.

19. Iced Hazelnut Mocha
What is an iced hazelnut mocha but liquid, caffeine-infused Nutella? Yes, please. Ask for no whip and swap in your favorite plant milk and you’re golden.
Barista Tip: Another secret menu item, this drink is easily recreated with a pump of hazelnut syrup to your regular mocha. Sipping a bit late? Ask for decaf or half-caf.

20. Nitro Cold Brews
Nitrogen-infused cold brew takes on a foamy, almost Guinness-like head that’s smooth to the last sip. Opt for the original or sweeten your experience by ordering the Vanilla Nitro. Both are dairy-free and guaranteed to wake you up and keep you going for hours on end.
Barista Tip: Don’t ruin the foam by pouring plant milk into your Nitro. If you must have coffee with plant milk, opt for a regular cold brew instead. The magic here is in the luscious foam.