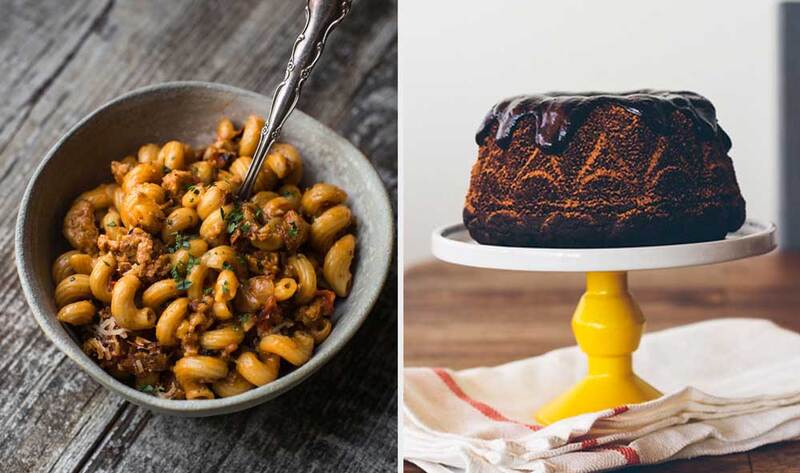 You’ve got the perfect activity planned and the perfect gift, but when it comes down to the food on Father’s Day, you’re a bit weary. Of course, you want to please him, but treating him to a steakhouse meal is against your vegan values, and you know he’ll complain the entire time if you go out to a vegan restaurant. Plus, we’re still trying to stop the spread of the coronavirus, so going out may not be the best option, anyway. Avoid confrontation and give Dad a meal he’ll actually enjoy by whipping up a few of these Dad-friendly vegan dishes. From breakfast to dessert, we’ve got you. 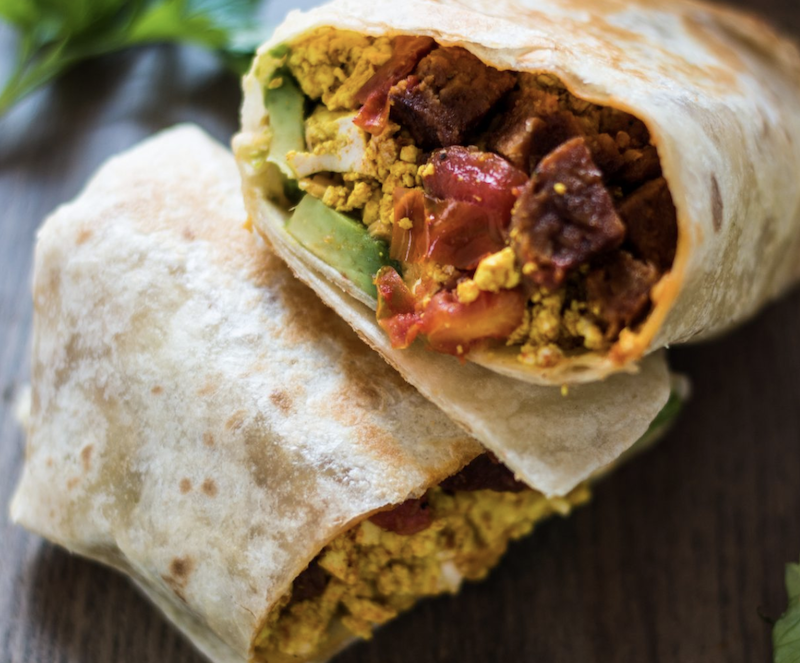 1. Spicy Sausage and Tofu Breakfast Burrito by Nut-Free Vegan
This grab-and-go breakfast is so simple, even Dad can pull it off. Spend a bit of bonding time together in the kitchen and teach him how to make it. The recipe relies on store-bought ingredients such as vegan sausage links, tofu, and vegan cheese. The most difficult part is wrapping the burrito. If it falls apart, call it a breakfast bowl and dig in. 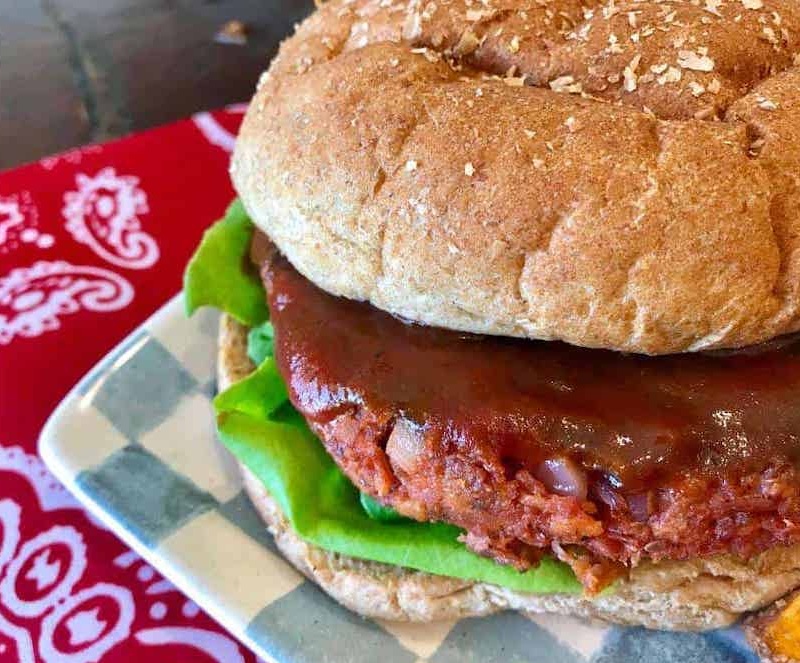 2. Beyond Meat Meatloaf Burgers by Audrey Dunham
For Father’s Day, you can do more than just slap a Beyond Burger on a bun (and that bun better be toasted). This homemade hefty handhold will surely impress, and he might even let you take a turn at the grill during the next barbecue. 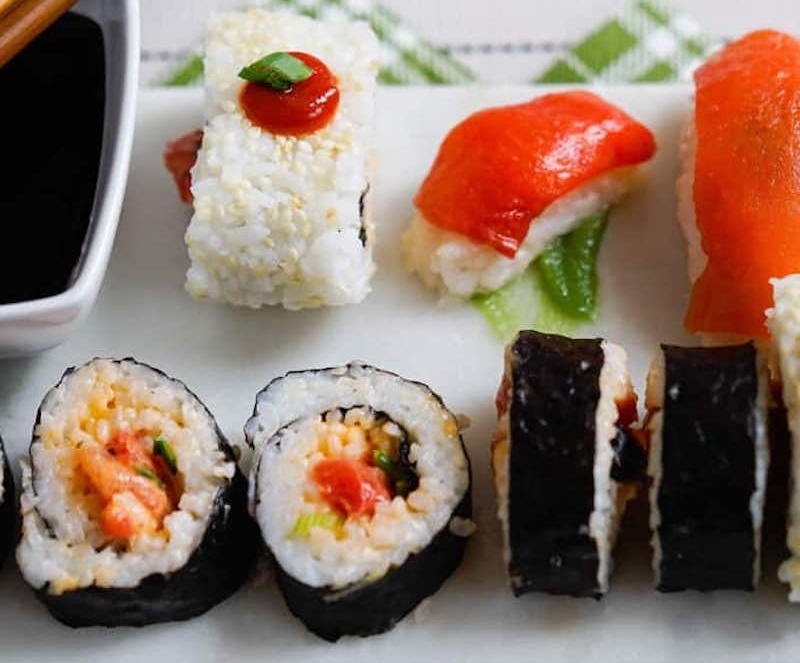 3. Spicy Watermelon Tuna Sushi Rolls by Edgy Veg
If your dad goes out with his buddies for All-You-Can-Eat sushi, indulge his cravings with this remarkably fishy plant-based tuna roll. You can transform the humble watermelon into a sushi-grade tuna consistency by marinating and baking it low and slow. It’s just one example of vegan magic (aquafaba is another example, if you were wondering). 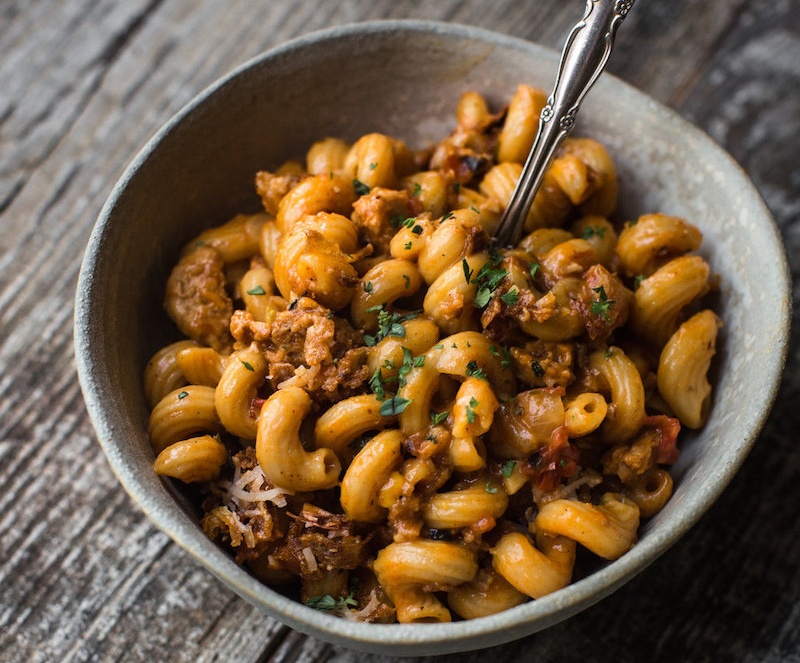 4. One-Pot Vegan Hamburger Helper by Mississippi Vegan
It’s the boxed meal your family knows and loves—but infinitely better. This recipe is made with a hint of spice and a generous pinch of nostalgia. It’s beefy, cheesy, and there’s not a green thing in sight—making it perfect for picky eaters and steak-and-potatoes dads alike.

5. BBQ Texas Pizza by BOSH
These two vegan bro bloggers might be from the UK, but they make an insanely good barbecue pizza. This hot pie is topped with seasoned smoked tofu, barbecue-rubbed mushrooms, corn, tomatoes, and a liberal amount of barbecue sauce. Just don’t tell Dad there’s no cheese—he won’t notice. 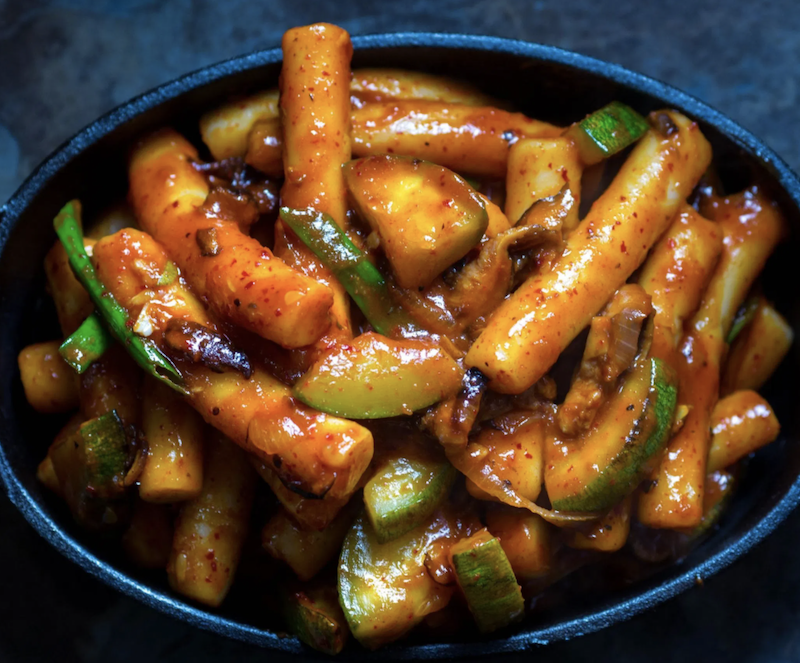 6. Korean barbecue by The Korean Vegan
You’ll definitely win Dad over when you prove that his favorite Korean barbecue dishes can be veganized. Treat him to a full feast with these savory scallion pancakes, kimchi, tteobokki, and soon tofu soup. 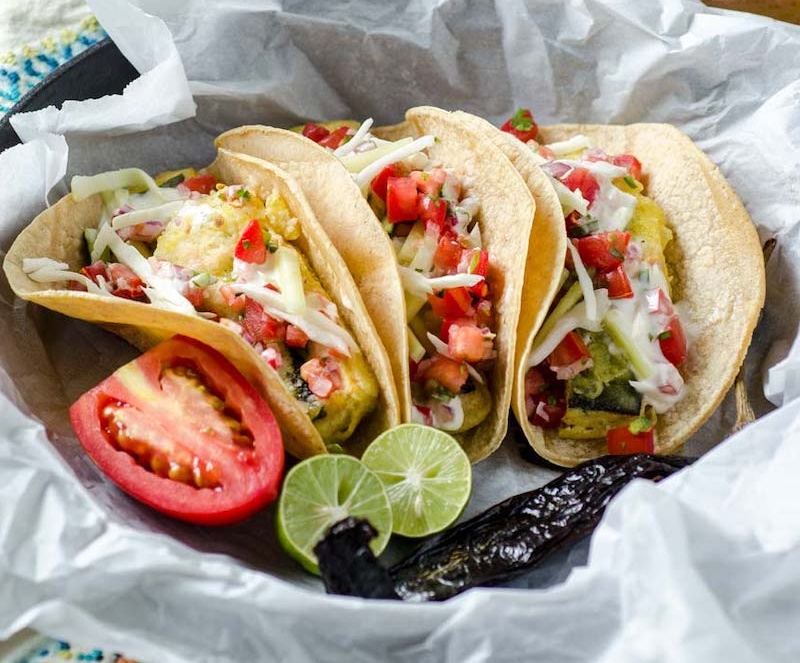 7. Vegan Fish Tacos by Dora’s Table
The love for tacos is universal—you’ll immediately capture Pop’s good graces with these traditional Baja-style tofu fish tacos. Thanks to an exceptional fishy marinade, there’s no way he’ll be able to detect the tofu. Let him take a bite and then watch his eyes bug out when you tell him he just ate tofu. 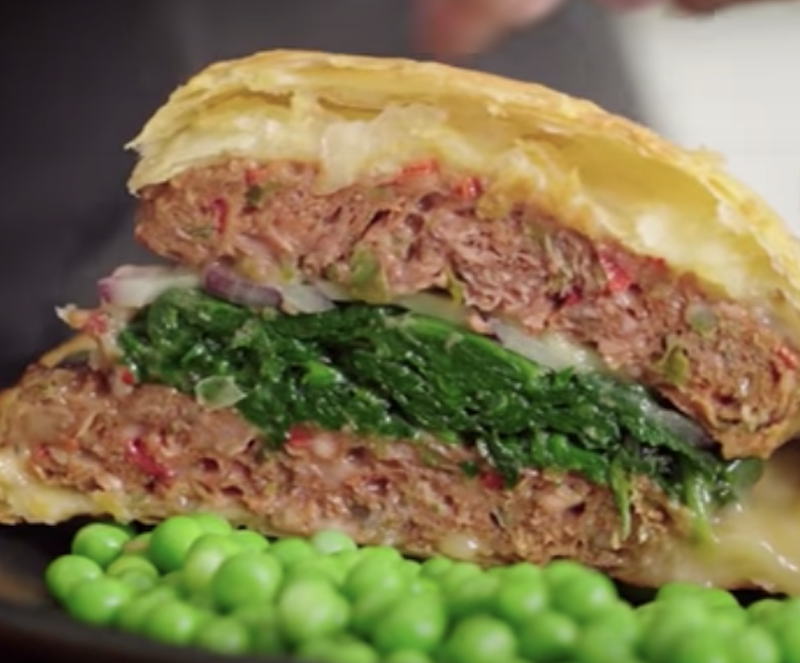 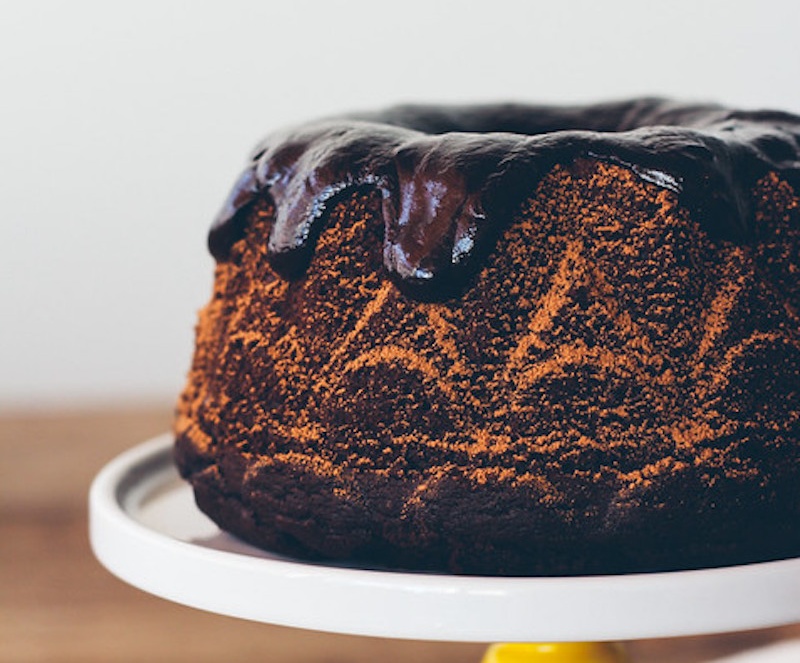 9. Chocolate Stout Cake with Whiskey Ganache by Oh, Ladycakes
Chocolate knows no gender, and there are definitely chocoholic dads out there. Pair his adoration of chocolate with strong alcohol and you’ll make his day. This showstopper is simple to put together and travels well. It may be the start of your annual vegan Father’s Day tradition. 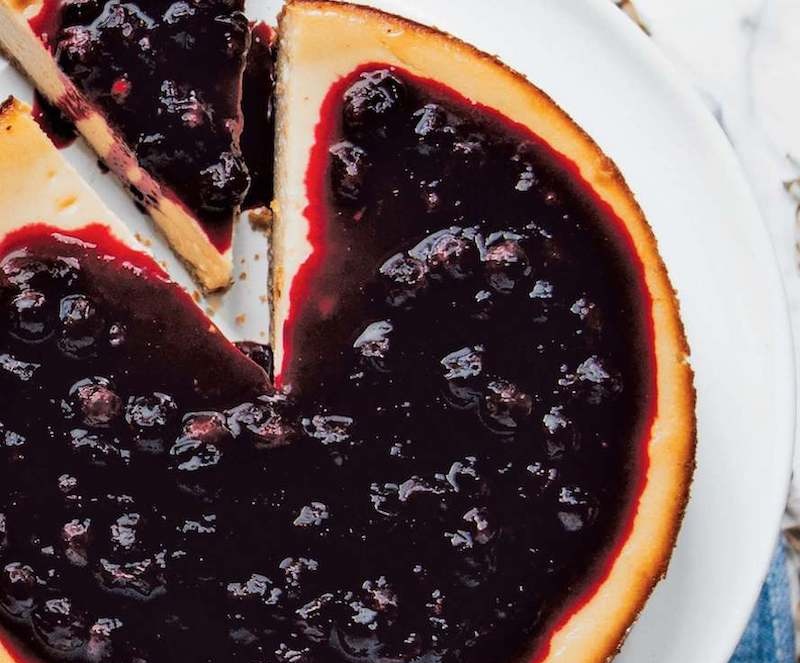 10. Cheesecake by Lauren Toyota
Save the raw cheesecake for another time—if you’re trying to veganize Dad, you’ll want to give him the real deal, no-frill, New York-style version first. Your search for the perfect vegan cheesecake stops here.

Top News: Billie Eilish Fights Climate Change, Cow With 115 Pounds of Plastic in Belly, and an Animal Testing Lab Forced to Shut Down