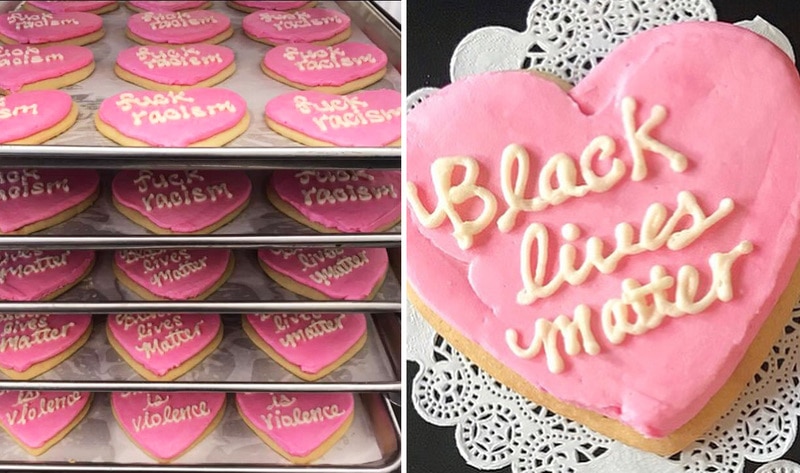 Chicago, IL-based vegan bakery Pie, Pie My Darling raised more than $6,800 as part of Bakers Against Racism, a virtual worldwide bake sale that is raising funds for charities that support the Black Lives Matter movement. Pie, Pie My Darling hosted two separate fundraisers. For the first, the profits from 200 anti-racist heart cookies and all cakes sales for an entire week ($2,442) were donated to organizations Black Visions Collective, Black Lives Matter, and Assata’s Daughters. For the second, Pie, Pie My Darling held a cake raffle and customers were asked to donate $5 for a chance to win a six-inch rainbow cake, and the $4,425 raised was donated to local organization Brave Space Alliance.

“I decided to participate because I was really wanting to find a tangible way to be helpful during this time and was inspired by so many artists creating anti-racist art,” Pie, Pie My Darling founder and head baker Heather Bodine-Lederman told VegNews. “Since baking is my medium, it just seemed like such a great way to send a clear anti-racist message, increase awareness, and raise funds for organizations that are fighting for justice and equality.”

Thousands of bakers across the world are participating in the Bakers Against Racism campaign, which runs from June 15 to 20 and aims to support the protests to end systemic racism by raising funds in creative ways.

Elephant in India Who Was Made to Walk 1000 Miles in Spiked Chains is Finally Free!