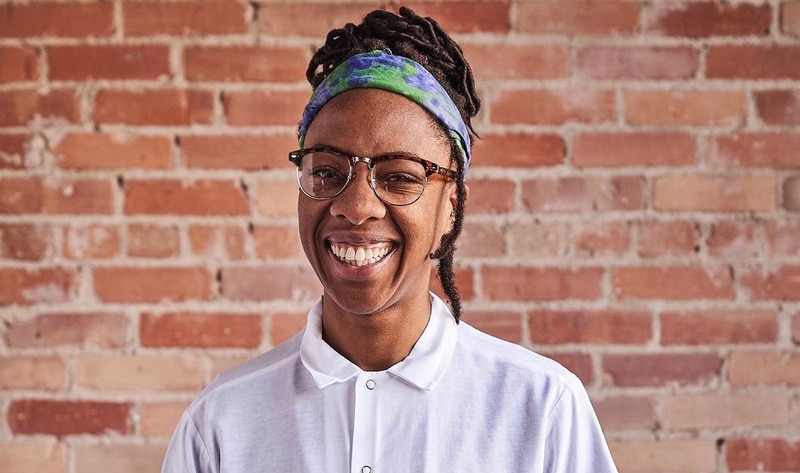 Asheville, NC businesses THE BLOCK off biltmore (the only vegan bar and dancehall in the city) and non-vegan restaurant Benne on Eagle will co-host a Juneteenth celebration and fundraiser today from 5pm to 8pm. Juneteenth—also known as “Emancipation Day” or America’s “second Independence Day”—marks the day in 1865 when the last remaining slaves were declared free, two years after President Abraham Lincoln signed the Emancipation Proclamation. Today, Juneteenth is celebrated in 47 states and is a state holiday in Texas, where slaves were the last to learn about their freedom.

James Beard-nominated chef Ashleigh Shanti—the Chef de Cuisine at Benne on Eagle—agreed to prepare a fully vegan menu for the event which will feature carrot dogs, greens, vegan mac and cheese, bean pies, and hibiscus tea. The event will feature musical artist Freedom the 10th Wonder who will spin old school R&B, Soul, Funk, Gospel, protest songs, and conscious hip-hop. There will also be an open mic for community members who want to discuss their thoughts about Juneteenth, racial justice, and transformative change.

The joint Juneteenth celebration will raise funds for Southern Restaurants for Racial Justice, a coalition of bakers, chefs, and restaurant owners joined together to support Black-led organizations who are actively working to dismantle systemic racism and oppression.

“I thought of this as a way of doing something special for the community in order to celebrate this momentous day,” Shanti said. “We are excited that the funds raised from the dinners will support the newly-formed Southern Restaurants for Racial Justice whose first project is to raise money for Color of Change, that advocates for sick leave and a livable wage for Black restaurant workers in the fast-food industry, holding prosecutors accountable, and helping people stay connected with loved ones behind bars during the COVID-19 crisis, among many other petitions and causes for racial justice.”

In Southern California, newly opened vegan restaurant VTree Hollywood—a collaboration between musician Nick Cannon and Chef Velvet (who also owns vegan restaurant VelTree in Charlotte, NC)—will host its own Juneteenth celebration in the parking lot of historic Yamashiro restaurant in the Hollywood Hills from 5pm to 8pm today. A position of proceeds from VTree’s event will be donated to Our Own Life, an organization working to empower local communities with access to mental, physical, and emotional health support resources.

From Baked Berry Oatmeal to Easy Chocolate Glaze: Our Ten Top Vegan Recipes of the Day!