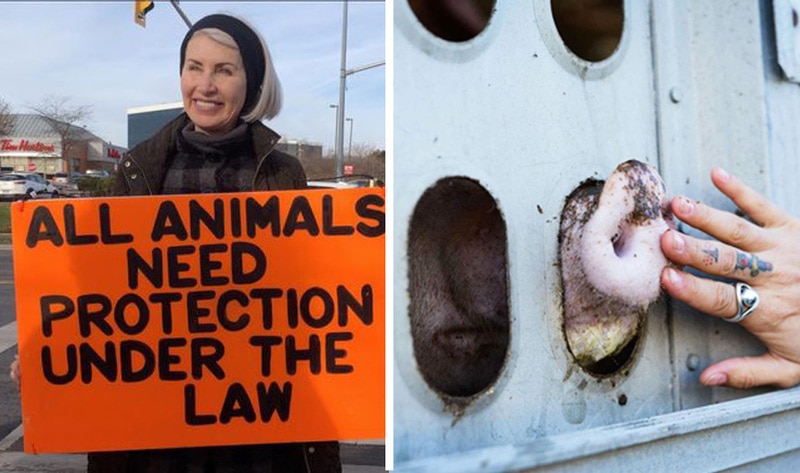 Today, longtime animal-rights activist Regan Russell was killed by a transport truck carrying pigs to slaughter outside of Fearmans Pork in Burlington, Ontario. The 65-year-old activist was part of a group giving water to pigs as they headed for slaughter, which she was doing when the transport truck accelerated and killed her. Videos taken at the scene—which are often used to document animal suffering—were reportedly confiscated by police.

New ag-gag legislation Bill 156 passed on June 17 in Ontario—which bans activists from “interacting” with farmed animals to document their abuse—includes verbiage that prohibits “persons from interfering with a motor vehicle that is transporting farm animals and from interfering or interacting with the farm animals in the motor vehicle without the prior consent of the driver of the motor vehicle.” Russell, who regularly attended local vigils, intended for this to be her last peaceful protest until the law could be overturned. She had been an avid animal-rights activist since 1979.

In 2015, Animal Save Movement founder Anita Krajnc, who was not present during Russell’s death, was charged with criminal mischief for giving water to pigs outside of Fearmans Pork, and acquitted in 2017 after a trial. “Regan was a kind, elegant, strong, and courageous person,” Krajnc said. “She was a mentor to others, and she always did activism with kindness in her heart.”

There is no information at this time about whether charges against the truck driver will be made.