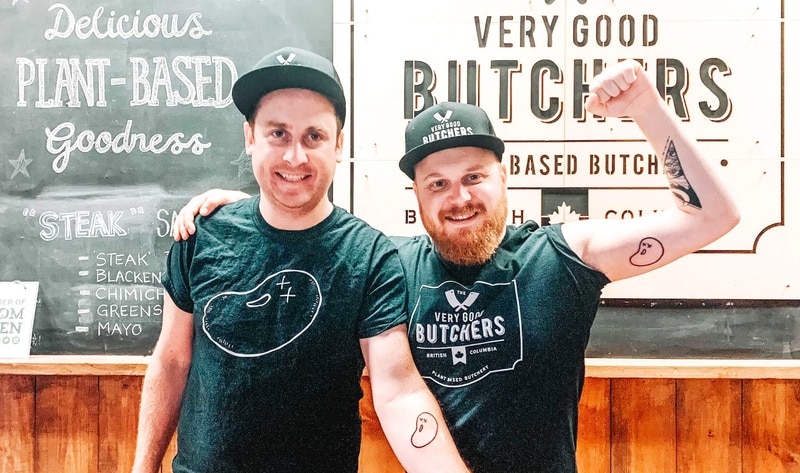 The Very Good Food Company (VGF)—parent company of Canadian vegan brand The Very Good Butchers (VGB)—saw an 800 percent increase in its stock value after its first few days of trading on the Canadian Securities Exchange (CSE). On June 16, VGF completed its initial public offering (IPO) of 16,100,000 common shares at the price of CAD$0.25 per share—which resulted in gross proceeds of approximately CAD$4,025,000—and began trading on the open market under ticker “VERY” on June 18.

Founded by couple James Davison and Tania Friesen in 2016, VGB initially sold its vegan meats and cheeses at local farmers markets before opening a storefront on Canada’s west coast in Victoria, BC in 2017—which, within four months, grew into a larger location at the Victoria Public Market. The shop features menu items made with VGB’s housemade vegan meats and cheeses such as burgers, subs, mac and cheese, and loaded fries. The company’s vegan meats are also now available at retailers across Canada and as part of a subscription butcher box.

This week, new Canadian investment firm Eat Beyond Global Holdings—which focuses on funding the growth of the alternative food sector—announced that its first investment was in VGF, stocks of which it purchased at the common share price last week. “We are thrilled to see The Very Good Food Company, another major plant-based IPO, mirroring the success of Beyond Meat. There is clearly extraordinary confidence in this market, and enormous demand for plant-based products,” Eat Beyond CEO Patrick Morris said. “We are excited to continue investing in this growing sector and continuing to be a part of more success stories like this one.”