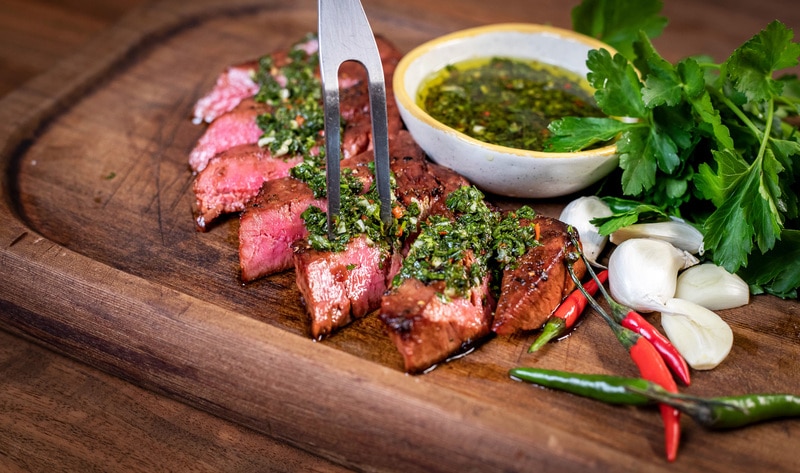 Last month, Colorado-based vegan brand Meati Foods (formerly known as Emergy Foods) quietly launched its first products at SALT Bistro in Boulder, CO. The company—which began operations in June 2019—did not make a public announcement of the launch in an effort to gather consumer intel on its whole cuts of fungi-based steak. SALT Bistro now serves a Bahn Meati Sandwich, which also features kimchi, pickles, cucumbers, sriracha sauce, and cabbage. According to the restaurant, the vegan sandwich has sold out every single day.

While many companies such as Beyond Meat and Impossible Foods focus on producing ground vegan meat, Meati is creating whole cuts of steak and chicken using a technology that relies on mycelium—the fast-growing root structure of mushrooms. The company brews mycelium inside fermentation tanks then blends the high-protein fibers—which resemble those found inside chicken breasts and steaks—with other vegetable-based ingredients and spices before forming them into vegan meat.

The COVID-19 pandemic has proved difficult for many companies in the food industry, but Meati co-founder and CEO Tyler Huggins says that its mission has been reignited by the virus. “As we watched the world change around us over the past few months, our mission proved to be even more important than ever,” Huggins said. “We’ve always known that bringing reliable, clean, and incredibly nutritious protein to the masses was important, but COVID-19 proved it’s essential.”

Currently, the company—which also produces vegan chicken breasts—is working to scale its production in order to partner with additional restaurants as well as making its products available for purchase directly by consumers, which it plans to do in the last quarter of 2020. At scale, the company is capable of producing the vegan meat equivalent of 4,500 cows overnight.

Rangers in Central Park Rushing to Save Duck with Plastic Stuck on Beak!