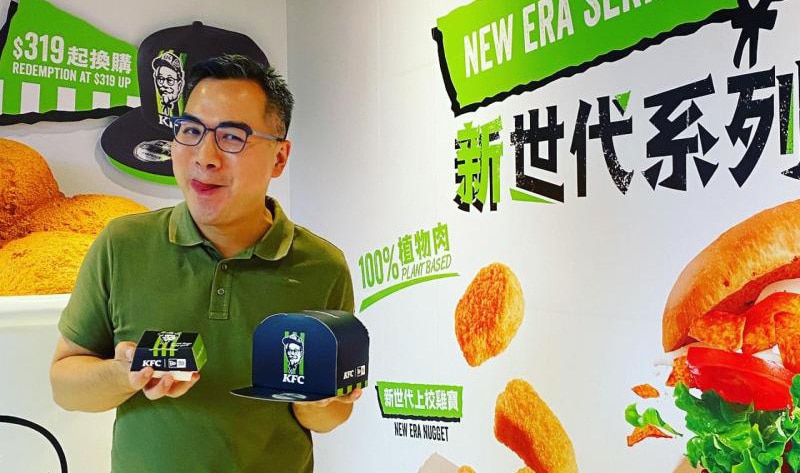 This week, international chain Kentucky Fried Chicken (KFC) launched a “New Era” meatless menu at 19 locations in Hong Kong. The vegan New Era Nuggets are made by United States-based Alpha Foods while the New Era Burger (which is served with dairy cheese) features a patty made by iconic Canadian brand Gardein. Both items are cooked on the same surface as animal products.

The new menu options were created in partnership with Green Monday, the Hong Kong-based social enterprise founded by David Yeung which is behind vegan grocery store and café chain Green Common—the local distributor of Gardein and Alpha Foods products. “This milestone launch will without a doubt further ignite the plant-based movement in Asia and globally,” Yeung said. The eco-conscious entrepreneur is also the founder of vegan meat brand OmniFoods, which launched its vegan pork product OmniPork on the menu of 4,200 Starbucks locations in China in April alongside Oatly and Beyond Meat products.

In China, KFC tested plant-based chicken nuggets made by agribusiness giant Cargill in April at three locations: Shanghai, Guangzhou, and Shenzhen. In Shanghai, the vegan nuggets sold out within an hour and 7,000 portions were purchased during the trial period. This month, KFC China—along with Taco Bell and Pizza Hut, which are all brands under parent company Yum China Holdings—tested the Beyond Burger on its menu at five locations in Beijing, Chengdu, Hangzhou, and Shanghai to ascertain consumer demand for the plant-based patty.

Outside of Asia, KFC added the Zero Chicken vegan burger—made with a bespoke Quorn patty—to its permanent menu across the United Kingdom in January after a successful trial at select locations. In Canada, KFC tested Plant-Based Fried Chicken (made by vegan brand Lightlife) in one location in Ontario last November. In the United States, KFC offered Beyond Fried Chicken (made by Beyond Meat) at one location in Atlanta last August—where it sold out in less than five hours, prompting KFC to expand the option to nearly 70 test locations in Charlotte, NC, Nashville, TN, and surrounding areas in February.