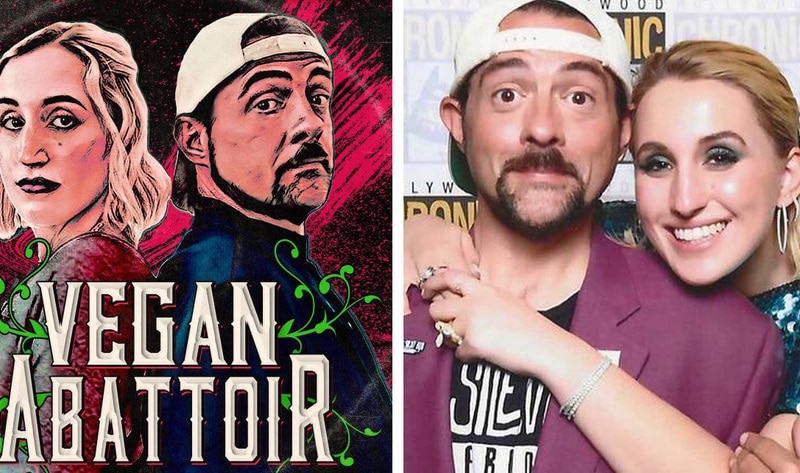 Famed director Kevin Smith—of Clerks and Jay and Silent Bob fame—and his daughter Harley Quinn Smith recently launched “Vegan Abattoir,” a new podcast that aims to dispel common myths about veganism by answering “vegan-curious” questions posed by “a meat-eating and dairy-drinking audience.” In the first episode, “Going Green,” the father-and-daughter duo discuss their individual journeys toward veganism and reveal that future episodes will feature vegan experts that will “slaughter misinformation” and “butcher bullsh*t.”

Smith announced the launch of the podcast on June 26, Harley Quinn’s 21st birthday. “Now that you’re an adult, I can finally tell you that while you’ve been a wonderful daughter, I’ve always thought of you as a friend first. I still remember the moment you were born, when I got to see your squishy l’il face for the first time,” Smith posted on Instagram. “So if anyone out there is looking to get Harley something for her 21st birthday, may I suggest simply subscribing to our brand new podcast, Vegan Abattoir! It sounds metal as hell, but the kid and I intend to slaughter misinformation and butcher bullsh*t about bein’ vegan in the least triggering, non-preachy way: by having the audience ask us questions about going green that we, in turn, can ask smarter people than us to answer.”

With the help of his daughter—a longtime vegan—Smith ditched animal products in March 2018 after surviving a “widow-maker” heart attack. Since, Smith has been an avid proponent of veganism. By the end of August 2018, the once 259-pound director lost more than 50 pounds—a milestone set by his doctor to prevent further heart issues—and thanked his vegan daughter, and his favorite vegan restaurant Veggie Grill, for the transformation.