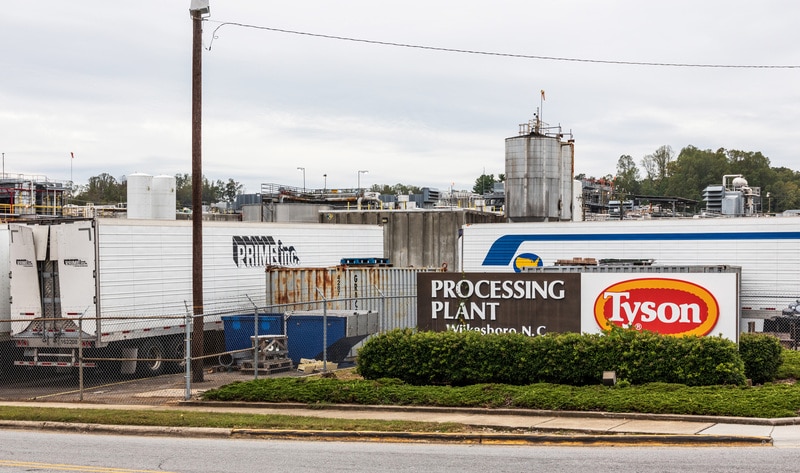 This week, a group of 122 organizations united in a week of action against Tyson Foods demanding that the meat company address its failure to manage the spread of COVID-19 among workers at its pork, chicken, and beef processing facilities nationwide. As of July 2, 26,500 positive COVID-19 cases have been tied to meatpacking facilities in at least 254 plants in 33 states, and at least 95 workers have died at 39 plants in 24 states as a result, according to data compiled by the Midwest Center for Investigative Reporting. More than 8,500 Tyson employees at 37 poultry, pork, and beef facilities in seven states have tested positive for COVID-19—an infection count that is more than double that of any other meat company.

“Tyson’s egregious treatment of workers during COVID-19 is only the latest example of the company showing disregard for its employees, its contract growers, local communities, the environment, consumers, and animal welfare,” Chloë Waterman, Program Manager at environmental organization and group member Friends of the Earth, said. “This week of action gives impacted communities and organizations across sectors the opportunity to stand in solidarity with Tyson workers who are being forced to choose between their jobs and their lives during this pandemic.”

“Even during a pandemic, Tyson has continued to prioritize profits over worker safety, animal welfare, and public health,” Taylor Ford, Director of Corporate Engagement at animal-rights organization and group member at The Humane League, said. “For too long, Tyson has treated both workers and animals as unfeeling commodities, serving the single purpose of supporting its bottom line. The Humane League is proud to stand alongside organizations urging that the industry leader take critical steps to rebuild our broken food system and make meaningful changes for those victimized within its supply chain.”

Similarly, last month, the Iowa chapter of the League of United Latin American Citizens (LULAC)—the country’s oldest and largest Latino civil-rights organization—partnered with a coalition of organizations to launch its Boycott Meat campaign to bring awareness to the plight of slaughterhouse workers during the COVID-19 pandemic and send the message that producing meat at the risk of worker health is not essential.

From Lentil Shepherd’s Pie to Pumpkin Spice Pop Tarts: Our Top 10 Vegan Recipes of the Day!