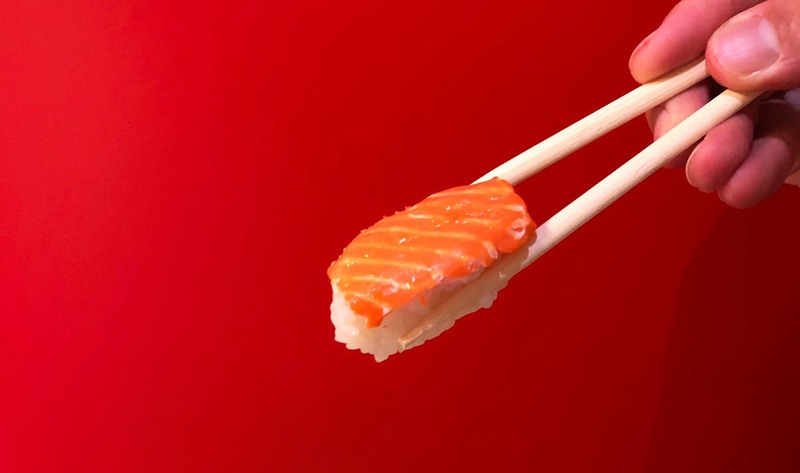 A group of international students from Sweden, Spain, and Denmark recently developed 3D-printed salmon. In 2017, PhD students Robin Simsa, Theresa Rothenbücher, and Hakan Gürbüz began working together on using 3D-printing in developing medical technologies and pivoted to plant-based seafood with the mission of creating a sustainable alternative to displace the environmentally destructive global fishing industry. To make the salmon, the students—who are working together under the project title “Legendary Vish”—use a blend of mushrooms, pea proteins, and gelling agents such as agar agar, and omega 3-rich oils to create a realistic distribution of red meat and white connective tissue through their proprietary printing process. The team is also working with flavor experts to recreate the nuanced taste of salmon—which can be used in preparations such as sashimi and smoked lox.

“We saw that in the plant-based seafood market, there are currently mainly unstructured products, such as fish sticks or burgers. However, products with a more complex structure such as salmon fillets can not be found on the market right now, “ Simsa, the CEO of the project, told FoodNavigator. “We saw a unique opportunity in utilizing 3D food printing to create seafood products with a complex structure, which cannot be achieved with classical extrusion technologies.”

The Legendary Vish project is one of ten startups running for a finalist position—which comes with €210,000 ($237,520) in funding—in the Greenstart incubator, which is part of the Vienna Impact Hub. The students plan to base their company in Austria and upscale distribution of their products in 2022 locally and in Germany and Switzerland, before expanding to Scandinavia and other parts of Europe. In addition to salmon, the team plans to develop 3D-printed vegan tuna and herring.

Companies around the world are working to create whole cuts of vegan meat in an effort to provide cruelty-free alternatives for every type of animal product. Last week, Israel-based company Redefine Meat announced that it will debut its 3D-printed Alt-Steak—vegan steak made by combining proprietary plant-based blood, muscle, and fat formulations—at high-end restaurants later this year before expanding to market distribution in 2021.