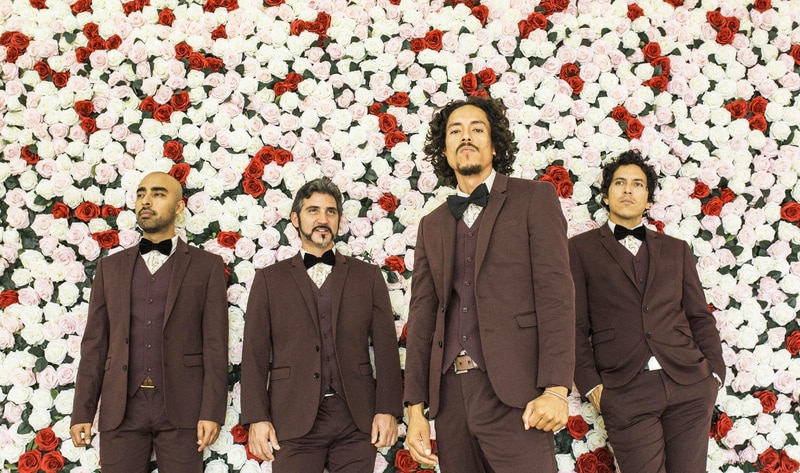 Los Angeles-based psych-soul band Chicano Batman created a vegan taco in partnership with local restaurant chain HomeState with the mission of raising funds for organizations working to help communities in need. The Chicano Batman taco ($5) features soyrizo, potato, guacamole, salsa verde, and is served on an organic corn tortilla. All profits from the taco will benefit Los Angeles-based nonprofits Watts Empowerment Center (which helps low-income families and children living in the Watts Housing Projects) and No Us Without You (which works to feed undocumented workers, primarily those who work back-of-the-house positions at restaurants affected by COVID-19).

The Chicano Batman taco is part of HomeState’s “Band Taco” program which it started in 2015 to raise awareness and funding for community programs through partnerships with music bands. The Chicano Batman taco will be on the HomeState menu until the end of the year and anyone who donates $33 to either organization—which feeds a family of four for one week—receive a Chicano Batman poster designed by local illustrator Mallory Cohn.

⁣ Our New Band Taco (it’s vegan!)⁣ ⁣ We are excited to share The Chicano Batman, our new Band Taco. It’s a vegan taco made with soyrizo, potatoes, guacamole, salsa verde on an organic corn tortilla. HomeState’s Band Taco program was established in 2015 as a way to raise awareness and funds for community organizations while working with bands we love.⁣ ⁣ It’s available starting today through the end of the year. All profits will be donated to Watts Empowerment Center (@redeyeinc) and No Us Without You! (@nouswithoutyou)⁣ ⁣ @chicanobatman is a Los Angeles-based psych-soul band. Their most recent record, Invisible People, is a tropicalia-infused “statement of hope, a proclamation… that despite race, class, or gender we can overcome our differences and stand together.”⁣ ⁣ The Watts Empowerment Center (@redeyeinc) is committed to the children, youth, and families within Watts Housing Projects. ⁣ ⁣ Over the past 8 weeks, WEC has provided: 22,000+ face masks, hundreds of meals to elderly and disabled people, semi trucks full of food, hygienic products, thousands of pounds of fresh fruit and vegetables, social, academic and athletic resources over video, phone and social media, mental and sociological support.⁣ ⁣ 100% of donations go directly to on-site impact within the Watts Housing Projects.⁣ ⁣ NO US WITHOUT YOU! (@nouswithoutyou) is a Boyle Heights organization distributing food to undocumented workers. These hard-working people who have, for years, fulfilled back-of-house restaurant positions, now find themselves in the vulnerable position of being unemployed.⁣ Launched with a goal of distributing meals to 30 families a week, they are serving over 600 families. ⁣ ⁣ Every $33 donated feeds a family of 4 for 1 week.⁣ ⁣ The first 10 guests to order the CB receive a poster created by our longtime collaborator, @mallory.cohn. ⁣ ⁣Every guest who donates $33 to either WEC or NO US WITHOUT YOU! via our website will also receive a poster while supplies last!⁣ ⁣ We hope you love The Chicano Batman Band Taco as much as we do – IT’S REALLY GOOD! And thank you for helping strengthen our community.⁣ ⁣ Stronger together,⁣ The HomeState Team 💛

On its permanent menu, HomeState also serves an Emo taco (refried black beans, guacamole, pickled red onions, and cabbage slaw) which can be ordered vegan on a corn tortilla.

Only 25 Percent Americans Recycle Electronics, Let’s Change that in 2020!

From Mediterranean Chickpea Spinach Stew to The Flakiest Scallion Pancakes: Our Top Eight Vegan Recipes of the Day!