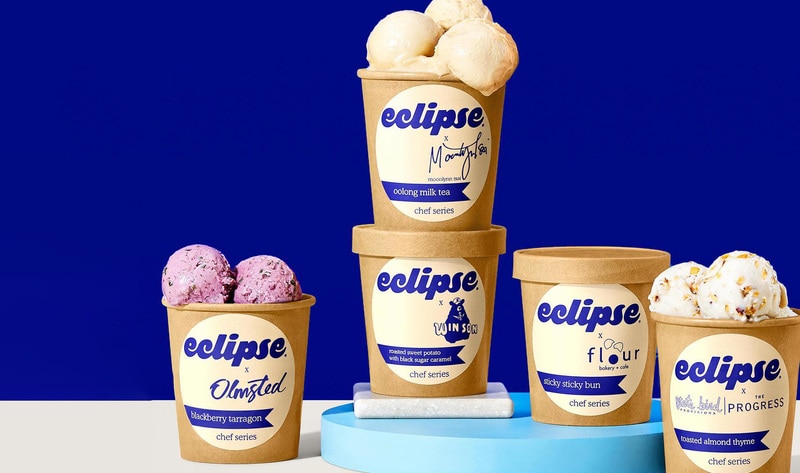 Innovative vegan ice cream brand Eclipse recently partnered with chefs across the United States to create new ice cream flavors with 100 percent of the proceeds benefiting charities. Created by food-technology experts Aylon Steinhart and Thomas Bowman, Eclipse made its debut last fall in New York City and San Francisco. The company uses a blend of plants such as corn and cassava to create vegan milk—free of soy, wheat, nuts, coconut, gums, gels, stabilizers, or GMOs—that is identical to animal-based dairy on a molecular level. For the first time, Eclipse is offering the limited-edition flavors alongside its signature flavors (vanilla, chocolate, and cookie butter) on its website with nationwide shipping. The chef collaborations include flavors such as:

“At Eclipse, we’re not just making another plant-based ice cream, we are making a true dairy replacement that has the taste, texture, and functionality of dairy,” Steinhart told VegNews. “We’re honored to collaborate with our chef partners for many reasons. As some of the best chefs in the nation, they have the highest standards for taste and quality, and their choice to work with Eclipse proves to us that we’ve achieved exactly what we set out to do—to create plant-based products that require absolutely no sacrifice. Even more importantly, as the restaurant community we love is facing challenging times, we are thrilled to partner with these incredible chefs to give back to charities that support the causes they care about most.”

Each month this summer and early fall, Eclipse will launch a new round of flavors with other chefs around the country. The brand’s signature flavors are $11.99 per pint, and the first round of chef custom flavors is available for $17.99 per pint. Eclipse milkshakes, soft serve, and ice cream base are available at ice cream shops, restaurants, and food trucks across the country.

Representatives Unite to Demand an End to Funding for Cruel Horse Roundups and Removals!