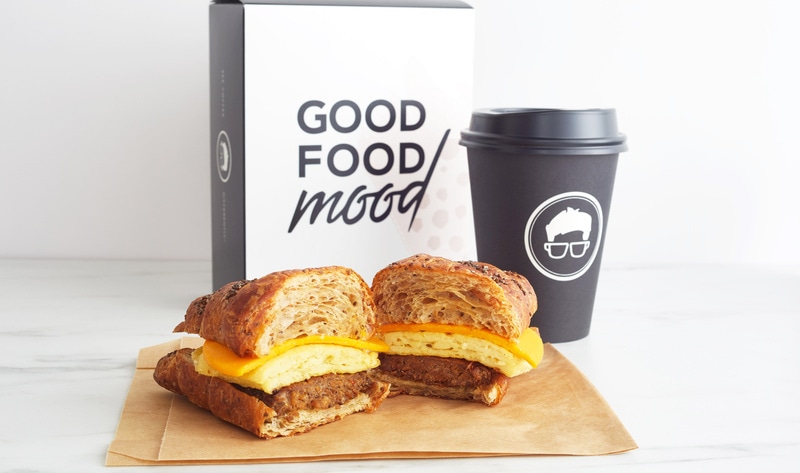 Quick-service restaurant chain Gregorys Coffee recently launched the Vegan Deluxe breakfast sandwich at all of its locations in New York City, New Jersey, and Washington, DC. The new sandwich features JUST Egg, Beyond Breakfast Sausage, and Daiya Foods’ cheddar cheese, all served on a buttery vegan croissant. While other coffee chains launch non-vegan sandwiches made with plant-based components—such as the Impossible Breakfast Sandwich at Starbucks and Dunkin’s Beyond Sausage Breakfast Sandwich—Gregorys founder Gregory Zamfotis is fully committed to offering a breakfast sandwich free of animal-derived ingredients.

“As someone who maintains a plant-based diet, piecemeal options are non-starters for me,” Zamfotis told VegNews. “Why choose to merely dip your toe into the water when you can make a fully plant-based offering that tastes damn good? I wanted a sandwich for everyone and the Vegan Deluxe is it. The perfect combination of plant-based ingredients that anyone would love. Vegan? Flexitarian? Straight carnivore? You’ll love this sandwich. It’s the holy grail of breakfast, in my opinion. “

Gregorys also offers a Vegan Scramble sandwich made with JUST Egg and Zamfotis decided to use the new folded format of the startup’s mung bean-based vegan egg replacer in the Vegan Deluxe. “JUST is an absolutely tremendous company. We were big fans of their original JUST Egg formula but when they hit us with 2.0 and added the folded JUST Egg, we truly fell in love,” Zamfotis said. “It inspired me to add a second fully plant-based sandwich to our menu, and I couldn’t be happier with the result”

The Vegan Deluxe—which is regularly priced at $5.95—will be available for an introductory price of $2 on July 29 in celebration of its launch.

More than 50 Percent Americans are Left Unemployed Due to Pandemic