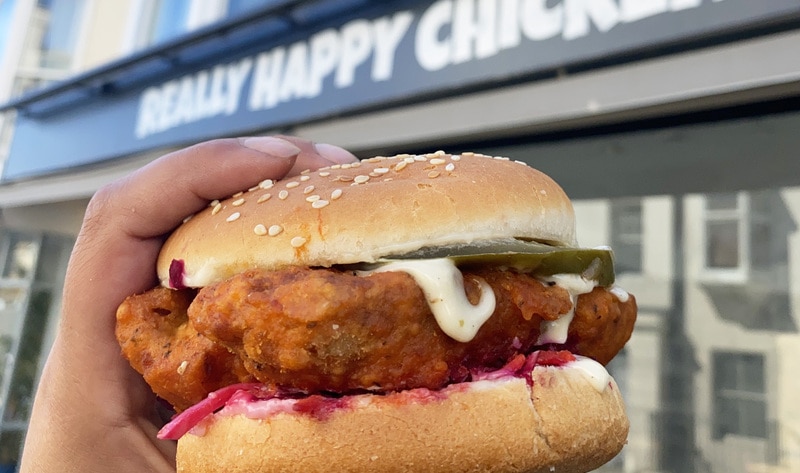 On August 4, new vegan fried chicken shop Really Happy Chicken (RHC) will open in Brighton, England. The shop’s menu is heavily inspired by United States-based chain Kentucky Fried Chicken (KFC). RHC will serve seitan-based chicken which can be ordered in the form of a burger (in Kentucky, Hot, Sticky, and “Big” options) or as wings (in Kentucky Hot, “Buff” Hot, and Korean Sticky flavors) with fries. Other menu options include beefy vegan burgers, Kentucky popcorn chicken, and sweet chili wraps. “We have developed a great tasting chicken alternative and have perfected the Southern fried coating, too” RHC founder Owais Amiri told vegNews. “We know the vegans of Brighton are going to show us a ton of love but we are confident this will sit well with the vegan-curious and non-vegans and that is what drives us most. For every vegan chicken meal consumed by a non-vegan, we know we would’ve saved an animal life, too.” The shop will be open for dine-in and takeout, with delivery options via platforms Deliveroo, Uber Eats, and Just Eat.

As for KFC, the chain added a vegan chicken burger to its UK locations in January; tested meatless nuggets and burgers in China; and expanded its test of the vegan Beyond Fried Chicken to more than 50 locations in Southern California in the US earlier this month. KFC is also developing 3D-printed cell-based chicken nuggets, which will be in their final stages of testing in Moscow this fall.